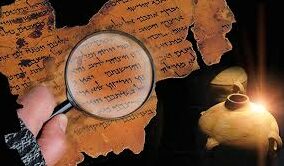 The Bible, The Word of God

The oldest writings of the books of the old testament, known to exist today, are the dead sea scrolls, which were discovered in 1947.  And although these scrolls don’t include full copies of each and every old testament books, all the books are represented at least in fragments, except for the book of Esther.  But it’s estimated that those scrolls were actually written, somewhere between 150 BC, and 70 AD.   But when exactly the first writings of each book of the Hebrew scriptures was done, is solely a matter of conjecture.

We do know approximately when the very first writing of any scripture was done though.  That would have been the ten commandments, written with the “finger of God” in about 1450 BC, almost 3500 years ago.   And I would presume that maybe that would have marked the beginning of when man first began to write down the word of God also.  It certainly would have set a precedent, to record the word of God in some form or another.

Now I mentioned the dead sea scrolls, which are the oldest writings of any of the books of the old testament, that we know of.  But of course that’s not to say that older writings might not be discovered in the future.   But how many of you have heard of the “silver scrolls”?   The “Silver Scrolls” are literal scrolls made of pure silver, but they’re very small in size.  One of them measures one inch wide, and 1/2 inch diameter when rolled up, and 3.8 inches long when unrolled.  The other scroll is smaller yet.  It measures only .4 inches wide (just under a half inch)  and less than 1/4 inch in diameter when rolled up, and 1 1/2 inches long unrolled.

It’s believed that these little scrolls were worn as pieces of jewelry, and some say probably as amulets, which are basically good luck charms, to ward off evil, and to bring God’s blessings.  But what makes these two little scrolls pertinent to our study of the bible, is that inscribed on these scrolls, is the text of  Numbers 6, verses 24, 25, & 26.   That text is referred to by some, as “the priestly blessing”.   Here’s what those verses say;  (And I’m sure you’ve heard these words before)  “The LORD bless you and keep you;  The LORD make his face to shine upon you and be gracious to you;  The LORD lift up his countenance upon you and give you peace.”

Now that’s not all that was written on the scrolls though.  Listen to this bit of information;  On the smaller scroll which measured about 1/2 wide and  1 1/2 inches tall, was inscribed with about 100 words, arranged in 12 lines of text.  It makes me think that whoever did the inscribing, must have used a magnifying glass to be able to do that.  But the tiny size of the writing is what made people conclude that these were made to be worn as amulets (good luck charms) because they surely weren’t made to be unrolled and read by the average person.

And I found all of this so interesting, that I thought I’d just read to you from a couple of articles written on the subject.  One of the articles basically gives a bunch of facts concerning the discovery of these two silver scrolls, and the second and third articles deal more with the biblical side of the story.

So here’s a portion of the first article..

, inscribed with portions of the well-known apotropaic

of the Book of Numbers

, and apparently once used as amulets

, were found in one of a burial chambers at Ketef Hinnom

,  an archaeological site near Jerusalem. The delicate process of unrolling the scrolls, while developing a method that would prevent them from disintegrating, took three years. Even though very brief, the two tiny silver scrolls are the oldest surviving texts from the Hebrew Bible.

“The scrolls were found in 1979 in Chamber 25 of Cave 24 at Ketef Hinnom, during excavations conducted by a team under the supervision of Gabriel Barkay

, professor of archaeology at Bar-Ilan University

. The site appeared to be archaeologically sterile (the tomb had last been used for storing rifles during the Ottoman period), but a chance discovery by a 13-year-old “assistant” revealed that a partial collapse of the ceiling long ago had preserved the contents of Chamber 25.

“The chamber contained approximately 60 cm. of material with over a thousand objects: many small pottery vessels, artifacts of iron and bronze (including arrowheads), needles and pins, bone and ivory objects, glass bottles, and jewelry including earrings of gold and silver. The tomb had evidently been in use for several generations towards the end of the First Temple

period, and continued to be used after the destruction of Jerusalem in 587/6 BCE. KH1 was found in Square D, the middle of the repository, 7 cm above the floor, while KH2 was found while sifting dirt from the lower half of the deposits in Square A, the innermost portion of the repository. Both amulets were separated from Hellenistic artifacts by 3 meters of length and 25 cm of depth, and embedded in pottery and other material from the 7th/6th centuries BCE.

“Barkay initially dated the inscriptions to the late-7th/early-6th centuries BC (later revised downward slightly to the early 6th century) on palaeographic grounds (the forms of the delicately-incised paleo-Hebrew lettering) and on the evidence of the pottery found in the immediate vicinity. This dating was subsequently questioned by Johannes Renz and Wolfgang Rollig,  who argued that the script was in too poor a condition to be dated with certainty, and that a 3rd/2nd century BCE provenance could not be excluded, especially as the repository, which had been used as a kind of “rubbish bin” for the burial chamber over many centuries, also contained material from the fourth century BCE.

“A major re-examination of the scrolls was therefore undertaken by the University of Southern California’s West Semitic Research Project, using advanced photographic and computer enhancement techniques which enabled the script to be read more easily and the paleography to be dated more confidently. The results, published in the Bulletin of the American Schools of Oriental Research (BASOR) in 2004, confirmed a date immediately prior to the destruction of Jerusalem by the Babylonians in 586/7 BCE.](An innovation in the report was the simultaneous publication of an accompanying “digital article,” a CD version of the article and the images). Dr Kyle McCarter of Johns Hopkins University, a specialist in ancient Semitic scripts, has said the study should “settle any controversy over [the date of] these inscriptions”

And here’s a portion of the second article..

While excavating a burial tomb near Jerusalem in 1979, Gabriel Barkay uncovered the oldest known copy of Old Testament scripture. The priestly blessing, recorded in Numbers 6:24-26, was discovered on two small silver scrolls dated to the 7th century B.C.

“This was a discovery of utmost importance,” said Barkay, professor of archaeology at Bar Ilan University near Tel Aviv. “These verses pre-date the famous Dead Sea Scrolls by approximately four centuries. They are the only biblical verses we have from the time of the First Temple [period].”

Barkay spoke of the discovery at New Orleans Baptist Theological Seminary Feb. 18 –- one of only two lectures during a trip to America. His was the inaugural lecture offered the seminary’s new Center for Archaeological Research.

Steven Ortiz, assistant professor of archaeology and biblical studies and director of the Center for Archaeological Research at NOBTS, served as field archaeologist at the Ketef Hinnom site where the scrolls were found. When Ortiz heard that Barkay was coming to America to lecture at Emory University, he convinced his archaeology mentor to come to New Orleans to speak as well. Asking Barkay to deliver the center’s first lecture was an easy decision, Ortiz said.

“He is an excellent and engaging lecturer,” Ortiz said. “I wanted our students to be exposed to one of the top scholars in the field of biblical archaeology.”

“The importance of the Ketef Hinnom inscriptions tends to be overlooked among students and pastors,” Ortiz said. “These scrolls are significant for the dating of the Old Testament. They provide evidence of the antiquity of the Bible.”

The two silver scrolls were discovered by Barkay’s team in a rock-hewn burial cave southwest of the ancient city of Jerusalem. The structure of the tomb was of interest to Barkay because it dated to the First Temple period, but it appeared that over centuries looters had taken all the artifacts. The tomb had last been used for storing Turkish army rifles during the Ottoman period.

However, Barkay and his team discovered that some artifacts had been preserved in a bone repository in the tomb. When a family member died, he or she was placed on a burial bench in the tomb along with personal items such as vases and jewelry, Barkay explained. After the dead body decayed, the bones were collected and placed in a bone repository located in a separate area of the tomb. The practice is referred to in the Old Testament as being “gathered unto his fathers.”

At some point a layer of the repository’s ceiling broke lose and covered the collected bones and personal items. Barkay said that the piece of ceiling appeared to be nothing more than the repository floor. An Israeli schoolboy helping clean the repository during excavations accidentally broke through the layer, revealing many bones and artifacts below.

As the team sifted through the items in repository, they discovered the two scrolls. After the initial discovery in 1979, scholars had the daunting task of unrolling and deciphering the text. They had no idea how important the find would be.

“It took us three years to unroll it [the larger scroll],” Barkay said. “When unrolled, it was covered with very delicately scratched characters. The first word we could decipher was the ‘YHWH’ –- sometimes anglicized as ‘Jehovah.’ This is the name of the Lord in the Hebrew Bible.”

And here’s a small portion of the last article..

In 1979 during the excavation of a late Iron Age (seventh century B.C.E.) tomb at the funerary site of Ketef Hinnom outside of Jerusalem, archaeologist Gabriel Barkay uncovered two small silver scrolls—no bigger than the diameter of a quarter—that were originally worn as amulets around the neck. When researchers from the Israel Museum, Jerusalem, unrolled the sheets of silver, they detected tiny lines of the ancient Hebrew script inscribed on them. High-resolution photos of the miniature writing were taken in 1994 by the West Semitic Research Project at the University of Southern California, giving researchers the opportunity to study and decipher the Hebrew text on the ancient amulets. When they finally read the arcane writing, the researchers discovered that the inscriptions, dating to the eighth–sixth centuries B.C.E., contained blessings similar to Numbers 6:24–26.1

The essay writing on the silver scrolls was clearly not meant to be read—the letters are too small, and the writing was furthermore concealed inside the rolls. If this was the case, then what purpose did they serve? In “Words Unseen: The Power of Hidden Writing” in the January/February 2018 issue of Biblical Archaeology Review, Hebrew Bible scholar Jeremy D. Smoak discusses what these ancient amulets from Ketef Hinnom can tell us about religion in ancient Judah.

In addition to containing blessings similar to Numbers 6:24–26, the inscriptions are illuminating for what they reveal about the deity Yahweh as well as amuletic magic in Iron Age Judah. As Smoak writes: