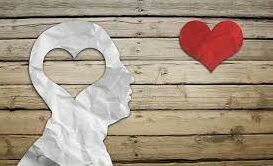 From Head to Heart

When you learn some new information, or when you receive some new “news”, that information “or news” gets stored in your head.  Everything you know, is up there somewhere, in your head.  And when we think about it, we all know lots of stuff.  I think I might have told you this, but one of the guys I work with always says..  “I know a little about a lot, and a lot about a little.”  That’s how most of us are, isn’t?  But when you put it all together, we all know a lot of stuff.

Some of what you know is right there at your finger tips.  But some other things that you’ve learned are tucked away somewhere in your memory.   Let’s make an analogy here.  Think of your head, as being like a computer.  We’ve got a “processor”, and we’ve got a “hard drive”, and we’ve got “memory”, all right there in our heads, (in our brain)  All the information that is right at your finger tips, (the stuff that you can rattler off just like that..  boom, boom, boom; That’s like the hard drive of our computer.

But then again, a lot of what we know, is tucked away in our memory, just like the memory in our computer.  The knowledge is there, but since it’s not right there on the hard drive, the “processor” part of the computer, has to go looking for it.   And that’s kind of the way our brain works too.  A lot of stuff is right there, boom, boom, boom.  But other stuff, well, our brain needs to do a little “processing” to bring it back up.

Have any of you been watching any of the news clips of President Biden, when he’s making an address, or especially when he’s answering questions?  I’m pretty sure that his “processor” isn’t working too well.  I’m pretty sure that both the hard drive and the memory, are just about burned up, and the processor, well, it has no idea what to do.

How about this..  Is everything that you’ve ever learned about the bible, embedded right there on the hard drive, where you can rattle it off at the drop of a hat?  Or has a lot of it gone to your memory, where it takes a little prompting to being it up again?

Here’s one more question..  Of all the people who have ever lived on this earth, who do you think had the greatest “hard drive”, the greatest “memory”, and the greatest processor?  It would have to be Jesus, wouldn’t it?

Now, think about your computer again.  What good would it do you, if you had a computer with the biggest “hard drive” ever made, and the greatest amount of “memory” possible, and the most powerful processor..  What good would it be, if all that “brain power”, shall we say, wasn’t programmed, with the proper “software”?  It would be useless, wouldn’t it?  Without the software to “program” all that stuff, it all just sits there and does nothing!  No software, means no action, no results.

Do you know, that in a sense, Jesus was “programmed”.   Listen to what He said in  John 5, verse 30;  “I can do nothing on My own.  (another version says;  “of My own initiative”) As I hear, I judge; And My judgment is just, because I seek not My own will, but the will of Him who sent Me.”   And then Jesus said in  John 12, verse 49;  “For I have not spoken on My own authority, but the Father who sent Me, has Himself given Me a commandment, what to say and what to speak.”   Jesus was “programmed” with the best “software” ever conceived!

And let me give you just a couple of examples, of what Jesus did, in accomplishing the work of the Father.   The scriptures say in  Mathew 9:36;  “Seeing the crowds, He felt compassion for them, because they were distressed and downcast, like sheep without a shepherd.”  And just one more example, from  John 11, verses 33 thru 35;  (this was the occasion when Lazarus had died, and his sister Mary was talking with Jesus)  And the scripture says;  “When Jesus saw her weeping, and the Jews who had come with her, also weeping, He was deeply moved in His spirit (we might say, He was moved in His heart) and greatly troubled.  And He said, “Where have you laid him?”  They said to Him, “Lord, come and see.”   And  verse 35  simply says;  “Jesus wept”.

Jesus was “programmed” with a soft, and compassionate heart.  Now, let’s apply this to us, shall we.

The new covenant, established with the blood of Jesus Christ, needs to be “programmed” into our mind.  (into our “processor” so to speak)  And it needs to be “inscribed” and “written” on our hearts.  God has “written the software” that needs to be both in our minds, and on our hearts;  So that we can be like Jesus, and so that we can say;  “My food, my meat, the very sustenance of my life, is to do the will of my Father, and accomplish His work.

God said through the prophet Hosea;  “My people are destroyed for lack of knowledge.  Because you have rejected knowledge, I also will reject you from being priest for Me.  Because you have forgotten the law of your God, I also will forget your children.”   (Hosea 4, verse 6)   Forgotten by God!  I’d say knowledge is pretty important, wouldn’t you?  It’s important in God’s eyes.

But the problem is..  You can have that knowledge in your mind, and you know the scriptures forward and backwards, BUT, if you don’t have those very same scriptures “inscribed” in your heart, (properly programmed within us) it won’t do you any good.  In other words..  The knowledge, without the “love”, is useless.

It’s exactly the same idea that James wrote about, in  James 2; 14 thru 16;  Listen to these words, and let me draw an analogy.   James wrote in  verse 14;  “What doth it profit, my brethren, if a man say he hath faith, but have not works?  Can that faith save him?”  If you say that you have “faith”, you’re saying that you have the knowledge;  You KNOW what the word of God says.  After all, “faith comes by hearing, and hearing by the word of God.”   (Romans 10:17)  So then, what does it profit you, if you have the knowledge that leads to faith, but the actions that stem from the heart, just aren’t there?

Now  verses 15 & 16;   “Suppose a brother or sister is without clothes, and daily food.  And one of you say to them: Go in peace, be ye warmed and filled;  And yet do not GIVE THEM those things that are necessary for the body, what shall it profit?”

You see a brother or sister (and really this applies to all people.  Galatians 6, verse 10  tells us;  “Therefore, as we have opportunity, let us do good to ALL, and especially, to those of the household of faith.”  to our brothers and sisters in Christ.  And so, you see a brother or sister who is without proper clothes, or without proper food, and you KNOW in your mind that it’s God’s will that they be clothed and fed.  You know it, “but yet”, as the scripture says, you don’t DO the will of God, and help tp provide for them the things that God has promised to provide for all Christians!  You know it, but you don’t do it!  You’ve got the knowledge in your mind, but where’s the love in your heart?

James concludes in  verse 17,  with these words;  “Even so faith, if it have not works, is dead, in itself.”   The knowledge in the mind, without the love in your heart, is dead, being alone.

“..this is the covenant I will make with the house of Israel after those days, declares the LORD.  I will put My law in their minds, and inscribe it on their hearts.  And I will be their God, and they will be My people.”   Having the knowledge, of the new covenant in Christ, in our minds, is a must.  BUT, we must also have the “spirit” of the new covenant, in other words, the love for God, and the love for others, inscribed on our hearts.  That’s got to be our “programming”.

Now let me ask you this..  How far would you say it is, from your head, to your heart?   It’s not very far is it?   I believe that with Jesus, the two were conjoined!  His mind and His heart, were inseparable.   And so, let’s heed the words of  Philippians 2, verses 5 thru 7;  “Let this mind be in you, which was also in Christ Jesus:  Who, existing in the form of God, did not consider equality with God, something to be grasped, but emptied Himself, taking the form of a servant, being made in the likeness of men.”

Can you really have the mind of Christ, without also having the heart of Christ?   Probably not.   And so how do you get your “faith” from your head to your heart?  How do you empty yourself, like Jesus did?  How do you cultivate that love in your heart, that Jesus had in His?   We’re exhorted in  1 John 3:18,  with these words;  “Little children, let us not love in word, nor in tongue, but in action and in truth.”   That’s what Jesus did.  Does the bible even record any instances where Jesus went around telling people how He loved them?  I can’t think of any off the top of my head.  But I can think of lots of times where Jesus told people He loved them, by His actions.

And that’s exactly what we need to do.  We need to tell people that we love them, by our actions.  We’ve got to “program” our hearts, to do the will of our Father, and accomplish His work, just like Jesus did.