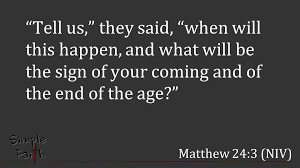 Since there is much debate as to what these questions mean, our objective here will be to see if we can determine exactly what they meant by these questions.

First, what exactly did they mean by  “what will be the sign of your coming”,  and second, what did they mean by  “the end of the age”?   That last phrase, “the end of the age”, can also be properly translated, “the consummation of the age”.  The word translated “end” means..  “the completion, or the consummation, or the end”.   And the word translated ‘age”, can mean several different things.  Here’s some of the meanings..  a cycle of time, especially of the present age as contrasted with the future age, an era characterized by some specific quality, so in other words, a “type” of an age.  There’s the Christian age for example, and there was also  the Mosaic age.  We sometimes talk about the nuclear age.   There was the age of the dinosaurs.  The word “age” can refer to any continued duration of time, or space of time.  So there’s a lot of flexibility with this word.  That’s why it can be a bit ambiguous as to the exact meaning in this verse.

So the question speaks of the completion, or consummation of some age, but which age?  Some people simply think it refers to the end of this world, in other words,  the age of the creation, or the “human age”.  Others think that it refers to the “age” of the Jewish temple and it’s sacrifices, or the end of the Mosaic age in general.  The Mosaic age is that period of time when the nation of Israel was under the law of Moses.

Concerning the question,  “What will be the sign of your coming”,  people are again split as to their understanding of what it means.  Many people believe that this refers to the second coming of Christ at the end of time.  But others believe that “His coming” refers to Christ coming in His kingdom, in other words, the establishment of His kingdom.  Present day Jews would probably call it the “Messianic Age”.  It’s a fact that the Jews in general, including His closest disciples, thought that Jesus would re-establish a physical kingdom of Israel, to it’s status as a ruling entity, like it was in the days of king David, and king Solomon.  The thief on the cross next to Jesus, when He was being crucified, asked Him to..  “Remember me when you come in your kingdom”.   Luke 23:42.   Even after Jesus’ resurrection, His apostles were still expecting Jesus to establish a physical kingdom.  Forty days after His resurrection, and just before He ascended back to heaven, His apostles asked Jesus,  “Lord, is it at this time, you are restoring the kingdom to Israel?”   Acts 1:6

Since the basis of the questions arose from the fact that Jesus had told the disciples that the temple would be so utterly destroyed, it does make sense that all the questions might refer to the temple, and the end of it’s “age”, and also to the establishment of the Messianic kingdom, or what Christians would call, the  kingdom of Christ.  So the questions might be thought of like this..   “Tell us when will this destruction take place?  And what will be the sign of your coming in your new kingdom, and of the completion of this present age?   I don’t see how anyone could say that wasn’t a reasonable assumption, at first glance.  There’s really only one problem that I could possibly see with that assumption.  The problem is, that if the disciples were indeed asking, “what will be the sign of your coming into your kingdom”;  Then Jesus never really gave an answer to that question.  On the contrary, the answer that Jesus DID give, were concerning things that would happen AFTER He established His kingdom.

For instance..  This conversation that we’re talking about, took place very shortly before Christ’s crucifixion and His resurrection, and the actual establishment of His spiritual kingdom.  Remember, when Jesus stood before Pontius Pilate, Jesus stated,  “My kingdom is not of this world.  My kingdom is not of this realm”.  John 18:36.   His kingdom is spiritual, not physical, even though His disciples didn’t understand that yet, at this time.  Now the bible doesn’t say specifically how many days elapsed, from this moment, until Christ’s crucifixion, but His kingdom was established on the day of Pentecost, just 50 days AFTER His crucifixion.   So Christ’s kingdom was VERY imminent!   But the answer that Jesus gave to His disciples, described things which would occur many years later than that.   The destruction of the temple and of Jerusalem didn’t take place for approximately another 37 years!   So Jesus obviously isn’t giving any answer pertaining to when He would come in His kingdom. 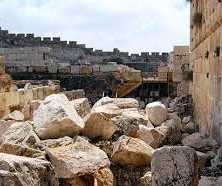 On the other hand, it definitely sounds like the disciples were associating all the things that they were asking about, with the same approximate time frame.  Again,  “When will the destruction of the temple happen, and what will be the sign of your coming, and of the end of the age?   So it definitely sounds like they were associating the destruction of the temple with whatever type of “coming” that they were referring to, and also with the end of some specific “age”.

Our next question probably should be;  Did the Jews actually believe in a “second coming” of the Christ?   They’ve always looked forward to the “coming” of the Messiah, or “the Christ”.  (The words Messiah, and Christ, both mean “the anointed one”, or in other words, the one sent by God to deliver His people)   But did they believe in a “second coming”?

The Samaritan woman that Jesus spoke to, at Jacob’s well, said,  “I know that Messiah is coming”.   John 4:25.   Martha, a sister of Lazarus, whom Jesus raised from the dead, said to Jesus,  “I believe that you are the Christ, the Son of God, the one coming into the world.”   John 11:27.   And she had previously said,  “I know that he (Lazarus) will rise again in the resurrection on the last day.”   V-24.   Martha was a very close friend of Jesus, as was her sister Mary, and her brother Lazarus.   And so I think it’s safe to say that those closest to Jesus, and probably the majority of Jews also, did believe in a resurrection on the last day. 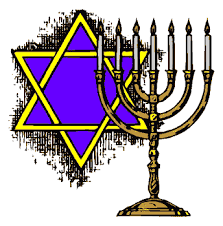 I think that it would be beneficial at this point to examine traditional Jewish beliefs concerning the time period called the “Messianic Age”.   In orthodox Judaism, the Messiah is properly called, the Mashiach.  The term “Mashiach” means the anointed one.  The Mashiach is the one who will be anointed king of Israel in the “End of Days”.    It’s interesting to know that in Judaism, Mashiach does not mean “savior”.  The Hebrew word “Moshiah” means savior, and God is the only savior.  Judaism teaches that the Mashiach will be the human king over Israel, but not divine in any way.   And to answer a previous question, Judaism does NOT believe in a second coming.  That is a fact of their belief.

Here’s a similarity between terms used in Christianity, and in Judaism.  Judaism refers to the “The End of Days” as the period of time when the Mashiach will come and reign over physical Israel.  Christianity refers to “The Last Days” as the period of time in which the Christ will reign over the “spiritual” nation of Israel.  In both religions, the “anointed one” will come in the “last days”, or in the “end of days”.   And both religions believe that we are now IN that “last”, or “end” period of time.

Let me give you a list of the things that the Mashiach will do, according to Judaism..

#1.  He will bring about the political and spiritual redemption of the Jewish people, by bringing them back to Israel, and restoring Jerusalem.

#2.  He will establish a government in Israel that will be the center of all world-government, for Jews and Gentiles alike.

#3.  He will rebuild the temple and re-establish it’s worship.

#4.  He will restore the religious court system of Israel, and establish Jewish law, as the “law of the land”.

If the present temple was going to be utterly destroyed, and if the “Mashiach” was expected to do all the things mentioned just previously, then the only natural response of the disciples when Jesus told them of that upcoming destruction was to ask exactly what they asked.

First..  When will the temple be destroyed.

Second..  What will be the sign of the establishment of the “Messianic Age”, in other words, “The End of Days”. 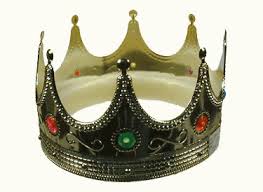 In the “end of days” the Mashiach would return Israel to their position of sovereignty, and rebuild the temple and re-establish all the Jewish laws and practices.  To the Jew, “your coming” and “the end of the age” meant exactly the same thing.  So their question to Jesus was,  When will this present temple be destroyed, and when would the “end of days” begin.

A good example of an Old Testament prophecy of the Messiah coming in the “End Days” is  Micah 4:1,  “And it will come about in the end days, that the mountain of the house of the Lord will be established as the chief of the mountains.  It will be raised above the hills, and the people will stream to it.”

Those words are actually a direct quotation of  Isaiah 2:2.

The words translated “end days” are sometimes rendered, “last days”.  The original Hebrew word means..  “the after-part, or end”.   So, “the after-part days” or “the end days”.

The question that the disciples asked Jesus was;  When will be the “end”, or the “completion” of the “duration”, or of the “period of time”?    Many translations say,  “of the ages”.   To the Jew, the “end of Days” was the “completion of the ages”.  So again, to the Jewish disciples of Jesus, their question was;  When will the temple be destroyed, and since it IS going to be destroyed, what will be the sign of the beginning of YOUR kingdom, the Messianic age.

Hopefully this study will have sparked some thoughts and even some questions in your mind.  And hopefully, you will leave your comments and questions at the space provided at the bottom of this page.

Thanks for being here, and may God bless you in the study of His word.