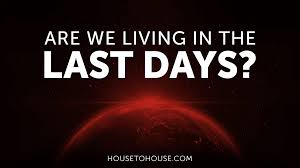 When Are The Last Days?

For example;  When God spoke directly to the men who were the heads, or leaders of their families, and He gave them specific commands which they were to follow, we commonly refer to that as the “Patriarchal age”, or the “Patriarchal dispensation”.  The “patriarch” was the male, head of the household, usually the oldest man.

God actually seems to make reference to these three periods of time, in  Hebrews 1, verses 1 & 2.  It says there;  “God, after He spoke long ago, to the Fathers (that would be what is sometimes called the “Patriarchal age”), and in the prophets, in many portions and in many ways (that would be the Mosaic age), in these last days, has spoken to us in His Son, whom He appointed heir of all things, through whom also He made the world.”

So it’s easy to see then, why people believe that “the last days” refers to the Christian age, because the bible specifically says that the last days are when God spoke to us through His Son.  And of course the words of His Son, are what we have here in the new testament.

Now, there is an interpretation that says that “the last days” are over.  And that those last days ended, when the new testament had been fully revealed.  So in other words, by the end of the first century AD, when the last of the books of the bible had been written, then, “the last days” ended.

And I believe that this interpretation says that “the last days” began, around the time of John the Baptist, when he first began proclaiming the coming of Jesus.  That would have been when John said, in  John 1:23;  “I am a voice of one crying in the wilderness, Make straight the way of the Lord, as Isaiah the prophet said.”   That period of time, would have lasted for about 70 years, beginning with the preaching of John the Baptist, around 30 AD, and ending with the full revelation of the last book of the bible, around 100 AD.

Now, if someone wanted to suggest, that we might look at this period of time, as a “dispensation” in itself, I’d understand what they were talking about.  It would be the dispensation, of the revelation, of the new testament.  But you surely couldn’t call that period of time, “the last days”, since they weren’t the last days of anything.  Actually, it would be quite senseless to call them “the last days” wouldn’t it?   You could call them “the DAYS of the revelation of Christ”, but ALL of those days certainly weren’t the “last” days.

Jesus talked a lot about “A last day” of the Christian age, didn’t He?  Jesus is quoted five times in the book of John, as using the phrase, “the last day”.  Jesus’ good friend Martha used the phrase “the last day” when she was talking to Jesus, in  John 11:24.  Speaking of her brother Lazarus, she said;  “I know that he will rise again, in the resurrection of the last day.”

Let’s ask this question;  When DID the Mosaic age end?  Did the Mosaic age continue up until the final revelation of the last book of the bible?  The answer is, No it didn’t.  So then again, when DID the Mosaic age end?  I know that it had ended by the time the book of Galatians was written.  And I know that, because  Galatians 5:4  tells us, that anyone who was trying to go BACK to the old law, seeking salvation, had been severed from Christ, and had fallen way from the NEW law of the Christian age.

Here’s what it says exactly;  “You have been severed from Christ, you who are seeking to be justified by the law (the law of Moses).  You have fallen from grace!”

Now listen to  Hebrews 8, verse 13;  I’m going to read this verse from the KJV, because it does a better job here than my NASB .   So, here it is,  Heb 8:13;  “In that He saith a NEW covenant, He has made the first, old.  Now that which decayeth and waxeth old, is ready to vanish away.”

Now that’s a pretty good translation, but let me read it to you in an even more literal way;  “In the saying, NEW, (referring to the new covenant) He has declared the first to be old and decaying.  Moreover, that which is made old, and failing from age, is near disappearance and destruction.”

Some people would have you believe that when the book of Hebrews was written, that it was THEN, that the first covenant was growing old, and that it was NEAR disappearing, but hadn’t disappeared yet.  But that’s not at all what the bible is saying here.  The writer of Hebrews had just quoted the words of the prophet Jeremiah, and it’s estimated that Jeremiah’s work occurred somewhere between about 626, and 587 BC.   That’s when this prophecy was given, about the NEW covenant.  And  Hebrews 8, verse 13  says that when the Lord said “NEW”, referring to a NEW covenant, He was THEN declaring that the first covenant was already growing old and decaying.   By at least 587 BC, God declared that the first covenant had gown old, and that it was NEAR disappearance and destruction.

Speaking of the old covenant,  Colossians 2:14  says, that Jesus “has taken it out of the way, having nailed it to His cross.”   And fifty days after Jesus “nailed the old covenant to His cross”, the terms of the NEW covenant were preached, thereby putting the law of Christ into effect.  Mankind was now living in the Christian age, during which time Christ reigns in His kingdom.  And as were told in  1 Corinthians 15:25 & 26;  “For He must reign until he has put all His enemies under His feet.  The last enemy that will be abolished is death.”  And of course death will be abolished, when Christ raises the dead ON the “last day”.

Jesus said in  John 6:40;  “For this is the will of My Father, that everyone who beholds the Son, and believes in Him, may have eternal life, and I Myself will raise Him up, on the last day.”

And here’s another problem with that faulty reasoning;  Everything that the bible says will occur in the last days, has NOT stopped occurring!

For example;  Hebrews 1, verse 2  says that “In these last days, He has spoken to us in His Son..”  Has God stopped speaking to us in His Son?  We have the words of His Son, and of the Holy Spirit of God, which is the very same thing as the Spirit of Christ.  Do those words speak to you and I today?  I know they speak to me!  And think about every person who ever hears those words for the first time.  Do those words speak to them?  Of course they do.  And there was a time when they first spoke to you.  And that certainly wasn’t in the first century!

A very big problem that so many people have, concerning how to interpret the bible, is that they make assumptions.  And in particular, they “read into” the bible, things that are never said.  For example;  In  Hebrews 1, verse 2,  it says that God “has SPOKEN to us in His Son.”  It doesn’t say anything about when those words were written down.  And the verse does NOT say that God does not CONTINUE to speak to us in His Son, every time we read His word.  So we need to be very careful that we don’t “assume”, what the bible does not say.

There is simply no way, that a person can reasonably claim that the word of God, does not speak to us today, and that it will not speak to people, right up until the LAST day.

Now here’s another example of something that the bible says will occur in the last days, and that we know for a fact, continues to occur even today, and no doubt will continue to occur until the LAST day.   Listen to  2 Peter 3:3 & 4;  “Know this first of all, that in the last days, mockers will come with their mocking, following after their own lusts, and saying;  Where is the promise of His coming?”

Now I personally can attest to the fact, that there are mockers today, who mock the word of God, not only in respect to the coming of Christ, but in respect to everything that the bible says!   And people will continue to mock God’s word, right up until the very last day!

Here’s an example from  2 Timothy 3:1 thru 5;  “But realize this, that in the last days, difficult times will come.  For men will be lovers of self, lovers of money, boastful, arrogant, revilers, disobedient, ungrateful, unholy, unloving, irreconcilable, malicious gossips, without self-control, brutal, haters of good, treacherous, reckless, conceited, lovers of pleasure rather than lovers of God, holding a form of godliness, although they have denied it’s power..”

Do you ever see that today?  Of course you do!  You know when that kind of behavior will stop don’t you?  On the LAST day. that’s when it will stop, and not before!

Isaiah 2:2,  and  Micah 4:1,  are both, prophecies about the coming of the kingdom of Christ.  And they both use the exact same words.  Listen to what they say;  “And it will come about in the last days, that the mountain of the house of the Lord will be established as the chief of the mountains.  It will be raised above the hills, and the people will stream to it.”

The kingdom of Christ was established in “the last days”.   And Christ will reign in His kingdom until THE last day.   Hebrews 9:26  says;  “..But now, once at the consummation of the ages, He has been manifested to put away sin, by the sacrifice of Himself.”   The sacrifice of Christ, for the sins, of the world, and the coming of the kingdom of Christ, occurred in the last days, at the consummation of the ages.   There will be, NO more days, after these last days.

Listen to  James 5, verse 3;  “Your gold and your silver have rusted, and their rust will be a witness against you, and will consume your flesh like fire.  It is the last days, that you have stored up your treasure.”   In other words, there’s not going to BE any more days, for you to live for the things that you should have been living for all along.  You should have been living for God, but instead, you lived for your silver and gold.  And it’s already, the last days. And before you know it, it’s going to be THE last day.  And then where are you going to end up?

2 Peter 3:10 & 11  gives us fair warning, with these words;  “But the day of the Lord will come like a thief, in which the heavens will pass away with a roar, and the elements will be destroyed with intense heat, and the earth and it’s works will be burned up.  Since all these things are to be destroyed in such a way, what sort of people ought you to be, in holy conduct and godliness?”

Brothers and sisters, we are living in the last days.  And we better be living for God, and not for our own pleasure.  Because the day of the Lord, the LAST day, is going to come like a thief, when you do not expect it!   Jesus said in  Mathew 24:44;  “For the Son of man is coming at an hour when you do not think.”

Don’t wait until YOUR last day, to believe, and obey, the words of God.  Live for God, from this day on.  Then it won’t bother you, what happens on THE last day.