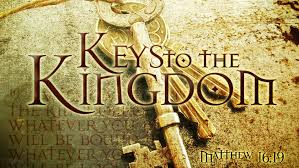 What’s the Difference Between the Kingdom and the Church?

Listen to  Colosians 1:13;  “For He has delivered us from the domain of darkness, and transferred us into the kingdom of His beloved Son.”

This verse tells us that God Himself, “transfers” Christians into the kingdom of His Son.   He takes Christians out of the world, and He puts them into His kingdom.

In  Acts 2:39 & 39,  after Peter had told the people that they would receive the gift of the Holy Spirit, if they would repent and be baptized, He then told them, that the promise that God had just made, was for “as many as the Lord our God shall CALL to Himself.”

So then, those who the Lord our God “calls”, He adds to his “called out assembly” of the saved.  That makes sense doesn’t it?  And Jesus said that he was going to “build” that assembly, and the gates of hades would not prevail against it.  And then in the next sentence, He said that he was going to give Peter the “keys” to the kingdom.  What kingdom?  Was anyone talking about a kingdom?  Well, I would say that Jesus must have been talking about a kingdom.  Was Jesus going to give Peter the keys to an entity that He had never said a word about?

The prophet Daniel,  prophesied about a kingdom, in  Daniel 2:44.  Here’s what he said;  “In the days of those kings, (Daniel had just prophesied about a series of kings that would rule in successive kingdoms)  the God of heaven will set up a kingdom which will never be destroyed.  And that kingdom will not be left for another people.  It will crush and put an end to all these kingdoms, but itself will endure forever.”

Later on, Daniel was actually shown a vison from God, depicting the coming of this eternal kingdom.  He wrote, in  Daniel 7:13 & 14;  “I kept looking in the night visions, and behold, with the clouds, one like a Son of Man was coming.  And he came up to the Ancient of days, and was presented before Him.  And to Him was given dominion, glory, and a kingdom, that all the peoples, nations, and tongues, might serve Him.  His dominion is an everlasting dominion, and His kingdom is one which will not be destroyed.”

So, one like a Son of Man, ascended with the clouds, up to heaven, and was given a kingdom.  And here’s the fulfillment of that very prophecy, as described in  Acts 1:9 thru 11;  “And after he had said these things, He was lifted up while they were looking on, and a cloud received Him out of their sight.  And as they were gazing intently into the sky while He was departing, behold, two men in white clothing stood beside them, and they also said;  Men of Galilee, why do you stand looking into the sky?  This Jesus, who has been taken up from you into heaven, will come, in just the same way as you have watched Him go into heaven.”

Jesus ascended ONCE into heaven, only once!  And God says, through the prophet Daniel, that when Christ ascended, He was given a kingdom.   Acts chapter 1,  describes Christ’s ascension, as taking place forty days after His resurrection, and ten days before the day of Pentecost, in approximately 33 AD.

We’re told by God, in  Ephesians 4:4 thru 6;  “There is ONE body, and one Spirit, just as you are called in one hope of your calling.  One Lord, one faith, one baptism, one God and Father, who is over all, and through all, and in all.”

There’s one body, and that body is the body of the saved.  And when we are added to the body, we are “transferred out of the domain of darkness (this world) and into the kingdom (the body, the called out assembly) of His beloved Son.”   (Colossians 1:13).

I truly hope that this helps you to understand, that the kingdom and the church, are indeed, one and the same.  It doesn’t take a lot of “figuring”, it simply takes “believing” what the bible says.

Thanks be to God, for the kingdom of His beloved Son, which he adds the saved unto.