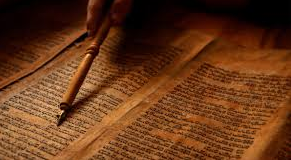 The Covenant of the Law of Moses

Today I’d like us to consider the first of those laws, the Passover, or the feast of unleavened bread.  Like I mentioned last week, this law was given to Israel even before they left Egypt. The command was given in detail, in  Exodus 12:14 thru 20.   I’m going to go ahead and read  verses 14 thru 17.  I won’t read the other 4 verses, because they’re just a repeat of the first three verses;

So here we go, beginning with  verse 14;  “Now this day will be a memorial to you, and you shall celebrate it, a feast to the Lord.  Throughout your generations you are to celebrate it as a permanent ordinance.” (or a “perpetual” ordinance, or an “everlasting” ordinance.  I trust that you remember the explanation of that word from last week’s lesson)

In other words, no other kind of work is allowed on those two days of the Passover week, except the work that is required in preparing the food that is to be eaten.  Keep in mind that these were not sabbath days.  Passover doesn’t necessarily begin or end on a Sabbath day.  Israel wasn’t allowed to prepare their food on the sabbath day, they had to prepare it the day before the sabbath.   Exodus 16:23  says;  “Tomorrow is a sabbath to the Lord.  Bake what you will bake, and boil what you will boil, and all that is left over, put aside to be kept for tomorrow.”  So not even food preparation was allowed on the sabbath.

But here’s something interesting to keep in mind, about the Passover law, and about God’s covenants in general..

It says in  Exodus 12:43-45;  “And the Lord said to Moses and Aaron;  This is the ordinance of the Passover;  No foreigner is to eat of it.  But every man’s slave, purchased with money, after you have circumcised him, then he may eat of it.  A sojourner or a hired servant may not eat of it.”

Salvation is a promise from God, to everyone who would display the same faith as Abraham displayed, as he obeyed God’s commands. The one and only way for anyone to display their faith in God, is simply to obey what God has said.  Galatians 3, verse 9  says;  “So then those who are of faith, are blessed with Abraham the believer.”   And  verse 18  says;  “For if the inheritance is based on law, it is no longer based on promise.  But God has granted it to Abraham by means of a promise.”   So then, we need to understand that the law of Moses, had nothing to do with salvation.   Verse 11  says;  “Now, that no one is justified by the law, before God, is evident.  For, the righteous shall live by faith.”

I’ve got to say one more thing about Abraham and the promises made to him by God.  When I talk about the original promise made to Abraham, back in  Genesis 12, verse 3,  which says;  “..and in you, all the families of the earth shall be blessed”, I speak of it as being completely understood, that it refers to spiritual blessings in Christ.  And those spiritual blessings are the forgiveness of our sins, and the promise of eternal life in heaven.  And to prove that, I’ll go back to  Galatians 3  again.  This time to  verse 14,  which says;  “In order that in Christ Jesus, the blessing of Abraham might come to the gentiles, so that we might receive the promise of the Spirit, through faith.”  And I’ll also go to  verse 29,  which says;  “And if you belong to Christ, then you are Abraham’s seed, heirs according to promise.”

And so that really nails down exactly HOW, all families of the earth are blessed in Abraham.  But it’s interesting to notice, that when the old testament talks about the promise given to Abraham, it’s really never specified, how that promise is a spiritual promise.  All the focus seems to be on the physical side of the promise, which of course was the inheritance of the land of Canaan.  And so you might wonder if Abraham really ever realized that the promise was also referring to the promise of eternal life in heaven.

But the new testament makes it very clear, that indeed, Abraham did understand the spiritual implications of that promise.  There’s a few verses in  Hebrews chapter 11,  that make it perfectly clear that Abraham understood that fact.   For example, listen to  verses 9 & 10;  “By faith he lived as an alien in the land of promise, as in a foreign land, dwelling in tents with Isaac and Jacob, fellow heirs of the same promise, for he was looking for the city which has foundations, whose architect and builder is God.”

So those verses alone make it pretty clear.  Abraham was already living in Canaan, the land of promise, but still the scripture says;  “..he was looking for the city which has foundations, whose architect and builder is God.”  Abraham knew perfectly well, that there was a lot more to God’s promise, than just the physical land of Canaan.

“All these died in faith, without receiving the promises, (once again, Abraham was already in the land of Canaan, but yet he hadn’t received the promise)  ..but having SEEN them from a distance, and having welcomed them from a distance, and having confessed that they were strangers and exiles on the earth.”  In other words, they all KNEW that there was a place beyond this earth, and beyond this life.  They KNEW that there is a spiritual life after this physical life.

“For those who say such things..  (those who say that they’re strangers and exiles on the earth)  ..they make it clear that they are seeking a country of their own.  And if indeed they had been thinking of that country from which they went out, they would have had opportunity to return.”  In other words, if they had been dreaming about going back to the country that they had come from, they could have gone back there is this lifetime.

“But as it were, they desired a better country, that is, a heavenly one.  Therefore God is not ashamed to be called their God, for He has prepared a city for them.”   They desired a heavenly country!  And so there’s no doubt, Abraham knew perfectly well, that the promise that God had made to him, was the promise of eternal life in heaven.  Not just, a promise of a physical land.

Before I started talking about Abraham, I was making the point that the law of Moses had nothing at all, to do with salvation.  How could it, when it was impossible for the blood of bulls and goats to take away sins?  (Hebrews 10:4)  No one was ever saved, because they followed the law of Moses.  The law was added because of sin, but the law could not forgive sin.  Forgiveness is solely based on a promise, and not on the law.  Once again,  Galatians 3:18;  “For if the inheritance (of eternal life) is based on law, it is no longer based on promise.  But God has granted it to Abraham by means of a promise.”

The law was added because of sin, but not for the purpose of forgiving sin.  Animal sacrifices were a part of the law of Moses, just like they were a part of the law given to all men, even from the time of Adam and Eve, and Cain and Abel, and Noah and Abraham, up until the time of Christ’s kingdom.   All those people were required to offer animal sacrifices, but none of them were ever forgiven of their sins because of their sacrifices.  The people of old could be forgiven of their sins, because of the fact that Christ was going to shed His own blood, to pay the price for that forgiveness.

This is so hard for people to understand, but it’s not the sacrifice that brings forgiveness, but it’s the faith that prompts the sacrifice to be made, that brings forgiveness.  It’s the same with the new covenant also.  We’re saved by faith, aren’t we?  Do we have laws to follow?  Yes.  Do we have to make sacrifices?  Yes, we have to make one sacrifice.  We have to sacrifice our self, in service to God.  But the reason we follow the laws that God has given us, and the reason that we’re willing to sacrifice our will, for God’s will, is because of our faith.

But again, it’s not the righteous deeds that we do, that saves us, but it’s the faith that prompts us to do those righteous deeds, that saves us.  That’s why  Ephesians 2:8  says;  “We are saved by grace, through faith..”   Listen to  Titus 3, verse 5;  “He saved us, not by works of righteousness that we have done, but according to His mercy, by the washing of regeneration, and by renewing by the Holy Spirit.”  We must do those deeds of righteousness, but we’re not saved on the “basis” of those deeds.

We must do the deeds of righteousness, in other words, we must obey the commands of God.  But that obedience isn’t really what saves us.  What saves us is the faith that has motivated our obedience.  And so that’s exactly the way it was for Israel under the old covenant law of Moses.  Yes, they were obligated to keep the commandments of that law, but that’s not what saved them.  If they were saved, it was because they had the same kind of faith that Abraham had.  The kind of faith, that motivated Abraham to obey everything that God commanded him.


So keep in mind, that the law of Moses, was not given to provide salvation, because it was not capable of providing salvation.  And the law of Moses did not override the covenant with Abraham.  But rather, it was secondary to the promises given to Abraham.  It was given so that the people could become aware of their sins, and to teach them to refrain from sin, by obeying God, rather than obeying their own lusts.

As it says in  Galatians 3:24;  The law was the schoolmaster, to lead the people to Christ.

And that’s our lesson for today.