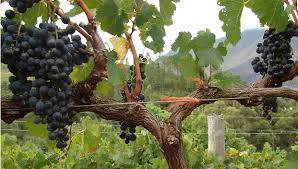 Our newspaper article this week is going to be about that parable of the vine and the branches.  And so I thought we all should review that lesson from Jesus.  Jesus began His lesson with these words;  “I am the Vine, the True..”  In other words, “I am the true vine..”  In this little analogy, it’s the vine, that gives life to the branches.  And the branches in turn bear fruit.  But it all stems from the life which is in the Vine.

“The Son of God has come, and has given us understanding, so that we might know Him who is true.”  That’s God!  Jesus Christ, the only begotten God, has explained God.  Jesus said;  “He who has seen Me, has seen the Father.”  “He is the true God, and life eternal.”  There’s no doubt, that Jesus was God in a human body.

And Jesus compared Himself to the true vine, who gives life to the branches of the vine.  Jesus said, in  John 15:4 & 5;  “Abide in me, and I in you.  As the branch cannot bear fruit of itself, unless it abides in the vine, so neither can you, unless you abide in Me.  I am the vine, you are the branches.  He who abides in Me, and I in him, he bears much fruit.  for apart from Me, you can do nothing.”  We do not have life, apart from Jesus.  How could anyone possibly bear fruit, is they don’t even have life?

Listen to  verse 6;  “If ANYONE does not abide in Me, he is thrown away as a branch, and dries up, and they gather them, and cast them into the fire, and they are burned.”  ANYONE who does not abide in Christ, “dries up”.  To “dry up” is to die.  Apart from Jesus, we’re dead!

I even double checked with my friend in Greece, who teaches the Greek language, and he agrees;  That is absolutely what that verse is saying.

The true vine, is the one that gives the life to individual persons.  “Apart from Me..  Jesus said,  ..you can do nothing.”   You cannot live spiritually, apart from Jesus Christ.  “He is the true God, and life eternal.”  Do you remember what Jesus Himself said in  John 14, verse 6;  “I am the way, the truth, and the life.  No one, comes to the Father, but by Me.”

The analogy of an individual Christian being a branch of Christ the vine, is very much like the analogy of an individual Christian being a member of Christ’s body.   1 Corinthians 12, verse 27  says;  “Now you (all of you together) are Christ’s body, and individually, members of it.”  That’s from the NASB.  The KJV doesn’t say;  “individually members of it.  It says;  “..and members in particular.”  But the best rendering of that, would simply be;  “..and members in part”.  All of us together make up the whole body, but as members, we’re each a part of it.  The meaning is, that we are all members of the one body, BECAUSE God has assigned each one of us, a PART in that body.

It says in  verses 25 & 26;  “That there should be no division in the body, but the members should have the same care for one another.  And if one member suffers, all the members suffer with it.  If one member is honored, all the members rejoice with it.”   That’s the way it should be, and we as individual members, need to make sure that it is that way.

Now it would seem so obvious, that it wouldn’t even need to be said, that individual Christians are being spoken of as members of the body of Christ.  But again, there are some who would try to claim that the members of the body are not individual Christians, but instead, the members are all the various denominations that exit all around us.  But all we need to do is read just one more verse to prove that wrong.  And that verse is  verse 28.

I’m going to read verse 27  again, and then  verse 28;  “Now you are Christ’s body, and members in part.  And some indeed, God has placed in the church (in other words, God has placed some of the members in specific positions in the church) ..First apostles, second prophets, third teachers..” and then the verse goes on to specify some of the gifts of the Spirit that some members had been given;  “Miracles, gifts of healings, helpings, administrations, kinds of tongues.”

Nowhere in the bible, is there even a hint, of what people today call, a denomination.  To denominate is to divide.  You believe this, so you can go be in this group over here.  And you believe that, so you go be in that group over there.  We’ll just divide ourselves so everyone can be happy.  But we’re forgetting someone who isn’t happy about it.  And the one we’re forgetting, is God!  God hates division within believers.

We need to always be reminded of  1 Corinthians 1, verse 10,  which says;  “Now I exhort you brethren, by the name of Jesus Christ, that you all agree, and there be no divisions among you.  But you be made complete, in the same mind, and in the same judgment.”

In  verse 13,  God asks us;  “Is Christ divided?”  And of course the answer is NO!  Christ is not divided, and therefore, neither should you be divided.  “If anyone does not abide in Me”, Jesus said, (remember that to ABIDE is the opposite of DIVIDE)  “If anyone does not abide in Me, he is thrown away..  (he’s divided from the vine)  ..he is thrown away as a branch, and dries up.  And they gather them, and cast them into the fire, and they are burned.”

James 4:8  tells us;  “Draw near to God, and He will draw near to you.”  That’s pretty clear.  But I think Jesus also makes it clear, that if you divide yourself from God, that He will also divide Himself from you.  Denominations are divisions from God and from Christ.  Denominations are NOT “branches” of Christ, but they are divisions FROM Christ!  And people don’t seem to realize the seriousness, of being divided from Christ and His teachings.  “Apart from Me, you can do nothing.”  No spiritual life, no nothing!

In the book of Revelation, we hear about people who were called the Nicolaitans.  We’re not given any specifics about them, but Jesus told the congregation at Ephesus, in  Revelation 2:6;  “But this you do have, that you hate the deeds of the Nicolaitans, which I also hate.”   Evidently the Nicolaitans were somehow divided from Christ.  They must not have abided in Him.  I wonder what their teaching was?

Jesus told the congregation at Pergamum, in  verse 15,  that in their congregation, they had some members there, who held to the teaching of the Nicolaitans.  Now I don’t know what that teaching was, but in the next verse,  verse 16,  Jesus said;  “Repent therefore!  Or else I am coming to you quickly, and I will make war against them, with the sword of My mouth.”  In other words, Christ will use His very Word, to make “war” with those false teachings.

That’s what we need to do, to fight off false teachings.  We need to go to the bible, and expose the truth to people.  If those people won’t believe the words of the bible, there’s nothing we can do about it.  But we do have an obligation to God, to at least make the words of the bible known.  “Preach the word”, right?  “Be instant in season and out of season..”   (2 Timothy 4:2)   In other words, preach the truth when it’s convenient, and when the opportunity arises, and preach the truth even when it’s not convenient.  Expose the truth about things, even if it’s inconvenient!

I’ve heard it said;  “Preach it when they want it, and preach it when they don’t want it!   And you can about be assured, that if you’re preaching the truth concerning a false teaching, they’re not going to want it.  That’s how it is when you preach the truth about divisions, and about denominations;  They’re not going to want to hear it.  But it’s the truth nonetheless.  Divisions are condemned by God, by His very word written in the bible.  And if you’re a part of any division, then His word condemns you too.

Wouldn’t it be much nicer to be a “branch of the vine”, than to be condemned for being divided?