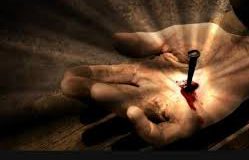 The apostle Paul wrote, in  Galatians 2, verse 20;  “I have been crucified with Christ, and it is no longer I who live, but Christ lives in me.  And the life that I live in the flesh, I live by faith in the Son of God, who loved me, and delivered Himself up for me.”

But here’s an argument that I often hear from people.  They say;  No, baptism isn’t when we’re crucified;  Baptism is only symbolic.  It’s just symbolizing the fact that you’ve already put to death, and crucified your old sinful ways.  People think that they crucify themselves with Christ, when they make the decision in their mind, to stop sinning and to follow Him.  And they think their sins are forgiven at that point, and that they’re saved.

That belief continues, by pointing out how there’s nothing magical about the water that you’re baptized in.  It’s God who washes away your sins, not the water.  The water, and the baptism, are both simply symbolic.  And to a degree, they’re right.  The water that we’re baptized in, isn’t what washes away our sins.  Water might be able to wash away a physical spot or stain, but what could it possibly do for a spiritual stain?  That’s what sin is, it’s a spiritual stain on our soul, not on our body.  When we are baptized, we are symbolizing physically, what’s happening to us spiritually.

Here’s an example for you;  The bible says in  1 Peter 3, verse 21;  “..Baptism now saves you!”  But it says that baptism is ..  “Not the removal of dirt from the flesh, but the answer of a good conscience toward God, through the resurrection of Jesus Christ.”

So then, No, the water doesn’t wash away our sins.  And the simple fact that we’ve been immersed in water, isn’t what saves us.  Otherwise, we could all be saved just by jumping in the lake.  It’s the Lord who saves us.  It’s the Lord who washes away our sins.  But the fact remains, that until we “answer” the Lord, out of a “good conscience”, and OBEY what He tells us to do, our sins remain.

The bible says, in  Romans 1:17;   “But the righteous shall live by faith.”  And it says the same thing in  Galatians 3:11.   And those verses are actually a quote of   Habakkuk 2, verse 4,  from the old testament.   So then it’s really an eternal principle.   The one who does God’s will, by keeping His commandments, does so because he has faith in God’s word.  And he believes that by doing what God has commanded, God will in turn, be faithful to keep His promises to us.  “The righteous, shall live by faith.”

Hebrews 10, 36 thru 39  explains it this way;  “For you have need of endurance, so that when you have DONE the will of God, you may receive what was promised.  For yet in a very little while, he who is coming, will come, and will not delay.  But My righteous one shall live by faith.  And if he shrinks back, My soul has no pleasure in him.  But we are not of those who shrink back to destruction, but of those who have faith, to the preserving of the soul.”

And then  Hebrews chapter 11,  goes on to tell us exactly what faith is.  It begins with these words,  in  verse 1;  “Now faith is the assurance of what’s hoped for, the conviction of things not seen.”  And then, almost the whole rest of the chapter, is devoted to telling of the many things, that people of old did, because of their faith.  And the whole point is, that faith isn’t just a believing of what God says.  Faith is the DOING of what God says.  “By faith, Abel offered.. a better sacrifice”  “By faith, Noah prepared..  the ark.”  “By faith, Abraham obeyed..  by going out, to a foreign land.”  “By faith, Moses..  choose to endure harsh treatment.”  “By faith, Moses..  kept the Passover.”

I’d like us to look at an example from the old testament, that illustrates how baptism saves us.  The example tells about Naaman, the leper.  You might want to open you bibles to  2 Kings chapter 5,  because I’m going to read several verses from that chapter.  And I’ll begin with  verses 1 thru 6;

“Now Naaman, commander of the army of the king of Aram (Syria) was a great man before his master, and highly respected, because the Lord had given him victory for Aram.  The man was also a valiant warrior, but he was a leper.  (He had the disease of leprosy)  Now the Arameans had gone out in bands, and had taken captive a little girl from the land of Israel, and she waited on Naaman’s wife.  And she said to her mistress;  I wish that my master were with the prophet who is in Samaria.  Then he would cure him of leprosy.”

“And Naaman went in and told his master (he told the king) saying;  Thus and thus spoke the girl who is from the land of Israel.  Then the king of Aram said;  Go now, and I will send a letter to the king of Israel.  And he departed and took with him, ten talents of silver, and six thousand of gold, and ten changes of clothes.  And he brought the letter to the king of Israel saying;  And now as this letter comes to you, behold I have sent Naaman, my servant, to you, that you may cure him of his leprosy.”

Now of course, the king of Israel didn’t have any power to cure Naaman.  But there was a prophet named Elisha, in Israel.  And Elisha had heard that Naaman had come there.  And so Elisha sent word to the king, and he said;  “Now let him come to me, (let Naaman come to me) and he shall know that there is a prophet in Israel.”  (V-8)

So Naaman goes to where Elisha lives, and stands at the doorway of his house, and Elisha sends a messenger out to speak to Naaman.  And here’s what Elisha tells the messenger to tell Naaman, in  verse 10;  “Go and wash in the river Jordan, seven times, and your flesh shall be restored to you, and be clean.”

Now that doesn’t sound very difficult does it?  Just go over to the Jordan river, and wash yourself.  The Jordan river runs for 156 miles through Israel, so I’m sure it isn’t hard to find a spot in the river to go and wash in.  So you’d think that Naaman would have been pretty happy that that was all it was gonna take to be cleansed of his leprosy.

And you’d think that people today, who already believe in God and in Jesus Christ, would be pretty happy to find out that all they have to do, to have their sins completely washed away, is to repent of those sins, and then be immersed in water, to simulate a burial and a resurrection, and they’d come up out of the water completely cleansed of sin.   You’d think, people would be happy to hear that!  But for some reason, many people are NOT happy to hear it!  They’re not relieved, to learn how easy it is to be forgiven of their sins.

And you know, that’s exactly how Naaman felt!  Listen to what Naaman said in  verse 12;  “Are not Abanah, and Pharpar, the rivers of Damascus, better than all the waters of Israel?  Could I not wash in them, and be clean?  So he turned and went away in a rage!”  You see!  Naaman didn’t see anything special about the water he was told to wash in.  Just like people today don’t see anything special about being immersed in plain old water.

Actually people today don’t want to have to do anything, to be forgiven of their sins.  They want God to just do it!  Forgive me right now, jut do it!   Actually they’d probably be very happy if we’d all gather around them and raise our hands, and praise God and sing, and give thanks, as long as they don’t have to do anything.

That’s pretty much what Naaman wanted too.   Verse 11  says;  “But Naaman was furious!  And went away and said;  Behold, I thought, he would surely come out to me (he thought Elisha would come out to him) and stand and call on the name of the Lord his God, and wave his hand over the place, and cure the leper.”   Sometimes God’s way is just too simple.  Just go wash in the river Jordan, seven times, and you’ll be cured.  But that wasn’t “grand” enough, and the water of the Jordan river, wasn’t “good” enough.

But now listen to  verses 13 & 14;  “Then his servants came near and spoke to him and said;  My father, had the prophet told you some great thing, would you not have done it?  How much more then, when he says to you;  Wash and be clean?  So he went down and dipped seven times in the Jordan, according to the word of the man of God, and is flesh was restored like the flesh of a little child, and he was clean.”

Thank God for children and servants!  The child who directed him to Elisha, and the servant who encouraged him to humble himself.

But let me ask you something.  Was there something special about the water of the Jordan river?  No, it was just water.  Is the water what cured Naaman of his leprosy?  No, the water didn’t have the power to wash away such a disease.  So then what washed the disease away?  I Should say, WHO washed the disease away?  God did, that’s who.  Washing in the river was just kind of symbolic, wasn’t it.  Naaman was washing in the water, but that wasn’t what took away his leprosy.

And that’s exactly what the bible says in  Romans 6, verses 3 & 4;  “Or do you not know that all of us who have been baptized into Christ, have been baptized into His death?  (there’s our crucifixion)  Therefore, we have been BURIED with Him through baptism into death, in order that as Christ was RAISED from the dead, by the glory of the Father, so we too.. (so we too should be resurrected) ..so we too might walk in newness of life.”

And why do we allow ourselves to be baptized?  Why do we symbolize our death to sin, and the burial of the old self, and the resurrection of the new self?  We do it because God has promised us, that if we do that, then He will forgive us our sins.  Just like God told Naaman, through the prophet Elisha, that if he would wash in the water of the Jordan river, that He (God) would wash away the leprosy.  And when Naaman obeyed, God did what He had promised to do.  Naaman’s flesh was restored.

And when we obey, what God has told us to do, then God will do exactly what he has promised to do for us.  He will wash away our sins.  It’s not the water that does it, and it’s not the symbolic act that does it, it’s God who does it.  And God does it, WHEN we obey His word, but NOT before we obey His word!  When was Naaman’s flesh restored?  It was restored AFTER he obeyed God!

And when are our sins washed away?  They are washed away AFTER we obey God’s command to be baptized, and NOT before!

And if we refuse to obey His word, by refusing to symbolize our death and burial and resurrection, then God will refuse to wash our sins away.  As with everything that the bible says, it’s our choice.  Will we obey God, or will we remain in sin?  Those are our only two choices.  I encourage you to make the right choice today.