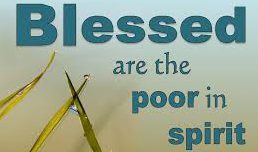 Who is “Poor” in Spirit?

Jesus said in  Mathew 5, verse 3;  “Blessed are the poor in spirit, for theirs is the kingdom of heaven.”  I was reading in Thayer’s Greek Lexicon, and it says that “poor” means..  “to be beggarly, and destitute, and afflicted”, and that it refers to “one who is crouched in wretchedness”.   And then it says;  “It has always had a bad sense, until it was ennobled, in the Gospels.”

Jesus took a word that had always been thought of in a “bad sense”, and He “ennobled” it, and turned it around, to use it in a “good sense”.  Because after all, how could it be bad, if the kingdom of heaven was given to those who were “poor” in spirit?

They say that the word “poor”, in the bible, has taken on the meaning of “humble”.  “Blessed are the humble  (those just like Christ) for theirs is the kingdom of Christ.”

Who is it that “Mourns”?

Mathew 5, verse 4  says;  “Blessed are they that mourn, for they shall be comforted.”   Jesus mourned, didn’t He?  He mourned quite often, according to the bible.   John 11:35  says “Jesus wept” over the sorrow of the family and friends of Lazarus, when Lazarus had died.

Jesus mourned over Jerusalem, in  Luke 13:34,  when He said;  “O Jerusalem, Jerusalem, that killeth the prophets and stones those sent to her.”

Jesus mourned greatly in the garden of Gethsemane.  We’re told in  Luke 22, verse 44;  “And being in agony, He prayed more earnestly, and His sweat became as it were, great drops of blood, falling down upon the ground.”

On the day of Pentecost, many of those who heard God’s word, “were pricked in the heart”.  (Acts 2:37)  The word of God “pierced” their conscience, and they felt their guilt.  And that’s exactly what God’s word is designed to do.

“The word of God is living, and active, and sharper than any two-edged sword, and piercing, even to the division of soul and spirit, of both joints and marrow, and quick to discern the thoughts and intents of the heart.”   (Hebrews 4, verse 12)

There is simply nothing else in this entire world, that can make you feel your guilt, except the word of God.  But then after you’ve felt your guilt, there’s nothing else that can build you back up, except the word of God.  In  Acts 20, and verse 32,  the apostle Paul wrote;  “And now I commend you to God, and to the word of His grace, which is able to build you up, and to give you the inheritance, among all them that are sanctified.”   To all who have been “cleansed and set apart”.

“Blessed are they that mourn, for they shall be comforted.”   Remember how in the parable of the rich man and Lazarus, Lazarus was “comforted”?   This bible word “comforted”, means..  “to be invited, and to be called near”.   Just like Lazarus, who represents the Gentiles, was “called near to God”, so also, all those who mourn, in other words, those who feel their own guilt, and who feel compassion for others, shall be “comforted” by God.

Blessed are the Meek

“Meek, and lowly in heart”, that’s how we need to be, because that’s how Jesus was.   And understand that “meek” does not mean “weak”.  Jesus was very strong, yet He was meek.  Meekness, means gentleness, and quietness, and mildness, but there’s nothing in the word that implies weakness.  As a matter of fact, what the word “meek” implies, is gentleness and quietness, in the midst of strength.   Gentleness and quietness, is spite of your strength.  Jesus had all the strength in the world, but he didn’t display it did He?  No, He actually covered it, with His gentleness.

How come so often, we think that we need to show off our strength, and show off our abilities?  Instead of covering them, with gentleness and humility?  It’s “the boastful pride of life”, isn’t it?   (1 John 2;16)

Besides those two verse that I already mentioned, “Blessed are the meek”, and “For I am meek and lowly”, there are only two other verse where that word is used.  And one of those verses is  1 Peter 3, verse 4,  and it has to do with women;  Actually it’s speaking of wives.  Listen, I’ll read  verses 3 & 4;  “Whose adorning , let it not be the outward adorning, of braiding of the hair, and of wearing jewels of gold, or the putting on of apparel;  But let it be the hidden person of the heart, in the imperishable apparel, of a meek and gentle spirit, which is in the sight of God, of great price.”

The word “meek” there, is sometimes translated as “humble”.  “A humble and gentle spirit.”  But even in this verse, there seems to be the idea of strength involved also.  Those verses are talking about what a woman should be adorned with.  And it says, it’s not the physical apparel, that should adorn a woman, but rather, it’s spiritual apparel, she should be concerned with.  And that inner, spiritual apparel is said to be the “imperishable apparel, of a humble an gentle spirit”.  It’s imperishable, surely that implies strength!  That’s the strongest most enduring apparel that there is!  The imperishable, and incorruptible apparel, of your inner spirit, “which in the sight of God, is of great price!”

Again, we see how God values the quite the opposite of what the world values.  The world values outward strength, but God values inward strength.  And just a word on what Jesus referred to, when He said that he was “lowly of heart”.  Some versions translate that as “humble”, just like they translate “meek” as “humble”.  But another thing you might consider, is that being “lowly of heart” refers to the one who, because of their humble spirit, takes on a “lowly” position, and depends entirely on God.

Who Inherits the Earth?

The scripture says;  “The meek shall inherit the earth.”  How do you think that those who humbly rely on God, will “inherit the earth”?   We know that none of us will ever literally inherit this earth, because the earth is going to be destroyed.  So then what does Jesus mean there?  Obviously, it must be a figurative statement.

Your opinion is no doubt as good as mine, but I wonder if it isn’t an allusion back to the promise that was given to the descendants of Abraham, concerning the promised land?  That was their inheritance, based on their faithfulness to God.  And if we will humble ourselves in faithful obedience, then we will also, “inherit the earth” so to speak.  It’s something to think about.

And let me read a few verses that speak of inheriting something from God.   1 Peter 3, verses 8 & 9  tell us;  “Finally, be ye all likeminded;  Compassionate, (we talked about the compassion of Jesus) loving, as brethren, tenderhearted, humbleminded, not rendering evil for evil, or reviling for reviling, but on the contrary, blessing.  Because for this you were called, that you should inherit a blessing.”

Here’s a passage from  Hebrews 6, verses 10 thru 12;  “For God is not unrighteous, to forget your work, and the love which you showed toward His name, in that ye ministered unto the saints, and still do minister.”  To show love toward God, we need to emulate Jesus;  to be like Him, and of course, to obey Him, because he was God in the flesh.

“And we desire that each one of you may show the same diligence, unto the fullness of hope, even to the end;  That you be not sluggish, but be imitators of them who through faith and patience..  (and I might add, through meekness, and gentleness, and humility)  inherit the promise.”

Jesus said in  Mathew 25, verse 34;  “Then shall the King say unto them on His right hand;  Come ye, blessed of My Father, inherit the kingdom prepared for you from the foundation of the world.”

“Blessed are the poor in spirit, and they that mourn, and the meek, and the humble, and the gentle, and the quiet, and the lowly of heart, the compassionate, the patient, the faithful, those who show love towards His name, those who render good for evil, those whose adornment is spiritual and inward, the tenderhearted;  And then there’s all those virtues that we haven’t mentioned yet, like the merciful, the pure in heart, the peacemakers, those persecuted for righteousness’ sake, those who suffer reproach, and accusations for Jesus’ sake, and the list could probably go on.

We’ve got a lot of work to do, to be like Jesus, and to be blessed by God, and to inherit the kingdom.  So then, let’s keep busy and let’s be “steadfast, immovable, always abounding in the work of the Lord, knowing that your labor is not in vain, in the Lord.”   (1 Corinthians 15, verse 58)