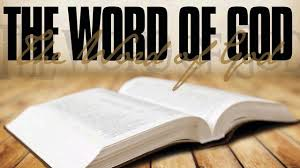 The Works of the Word

I want us to consider six separate, but related works, that the Word of God has accomplished, and continues to accomplish, and will accomplish.

So then, first of all;  The Word of God created life as we know it.   Genesis chapter 1,  describes how God created the heavens and the earth, the waters and the dry ground;  The grasses, and the plants, and the trees, and all vegetation;  The sun and the moon and the stars;  The fish of the seas, and the birds of the air;  All the living animals that roam on the earth, and God created man and woman.

Second;  The Word of God creates faith in God.  We’re told in  Romans 10, verse 17;  “So then faith comes by hearing the Word of God.”  And since the Word of God, is God, we could rightly say, that faith comes by hearing God.  And isn’t that the way it’s always been, even from the beginning of time?  God spoke, and His words created faith in those who heard.  Of course not everyone believed what God said, but for those who did choose to believe, their faith came from hearing God speak.

But God does tell us, in  Isaiah 55, verses 10 & 11;  “For as the rain cometh down, and the snow from heaven, and returneth not thither, but watereth the earth, and maketh it bring forth and bud, and giveth seed to the sower, and bred to the eater;  So shall My Word be, that goeth forth out of My mouth, it shall not return unto Me void, but it shall accomplish that which I please, and it shall prosper in the thing whereto I sent it.”

Now along that line, here’s an interesting verse.  1 Corinthians chapter 12,  is talking about miraculous spiritual gifts, and it tells how this gift was given to this one, and another gift was given to another one, and  verse 9  says;  “To another faith, by the same Spirit.”   Now I’m not 100% sure of the exact manner in which “faith” was given as a gift, but I do know this;  These gifts were given to those who had already acquired faith in God and in Jesus Christ, through the Word of God.  So then it’s not a contradiction to the fact that faith comes only by hearing the Word of God.  And we know that all of the gifts of the Spirit was for one specific purpose.  Verse 7  states clearly;  “But to each one is given the manifestation of the Spirit, for the collective good.”

Third on our list, is the fact that it was the very Word of God, which became the sacrifice for the sins of the world.   John 1, verse 14  tells us;  “And the Word became flesh, and dwelt among us, and we beheld His glory, glory as of the only begotten from the Father, full of grace and truth.”

Verses 11 & 12  tell us;  “He came unto His own, and they that were His own, received Him not.  But as many as received Him, to them He gave the right to become children of God, even to those who believe His name.”

1 John 2, verse 2  says;  “And He is the propitiation for our sins, and not for ours only, but for the sins of the whole world.”   The Word of God, who is God, became flesh, and “emptied Himself, taking on the form of a servant, being made in the likeness of men.  And being found in appearance as a man, He humbled Himself, becoming obedient even unto death, yea, the death of the cross.  Wherefore also, God highly exalted Him, gave unto Him, the name which is above every name.”  (Philippians 2:7 thru 9)

“And in none other is there salvation, for neither is there any other name under heaven, that is given among men, wherein we must be saved.”  (Acts 4, verse 12)  And remember please, “the name of Christ” refers to “the authority of Christ.”   God has given His Word, the authority which is above all other authority.  There simply is no other authority under heaven, given among men, whereby we must be saved.  The very Word of God, has that authority.

Fourth;  The Word of God, which created all life in the first place, now creates “new life” in Christ Jesus.   2 Corinthians 5:17  tells us;  “Wherefore, if any man is in Christ, he is a new creature;  The old things have passed away, behold, new things have come.”   And the new creature is created by the Word of God.

1 Peter chapter 1, verses 22 and 23,  tells us;  “Seeing you have purified your souls, in your obedience to the truth..”  (That’s the Word of God, right?  “Thy Word is truth”  John 17:17)   “Seeing you have purified your souls, in obedience to the Word of God, unto unfeigned love of the brethren, love one another, from the heart, fervently.  Having been begotten again..”  (a new creature, right?)  “Having been begotten again, not of corruptible seed, but of incorruptible, through the Word of God, which liveth, and abideth.”

Romans 6, verse 4  says;  “..that like as Christ was raised from the dead, through the glory of the Father, so we also might walk in newness of life.”   When the Word became flesh, and dwelt among men, what did John say that men beheld?  John said;  “We beheld His glory, glory as the only begotten rom the Father, full of grace and truth.”   (John 1:14)

“..I commend you to God, and to the Word of His grace, which is able to build you up..”   The word of God builds us up, it not only sustains us, but it makes us to grow!   We read in  1 Peter 2, verse 5;  “You also, as living stones, are being built up, a spiritual house, to be a holy priesthood, to offer up spiritual sacrifices, acceptable to God, through Jesus Christ.”

A “spiritual house”, a dwelling place for the Word of God.   Colossians 3:16  instructs us;  “Let the Word of Christ dwell in you richly..”  That means abundantly, and greatly.  To it’s fullest extent.  Let that Word of God dwell in you, so that everything that you do, is done with the intent, of fulfilling the commands of God.

In  2 Corinthians 1, verse 5,  the apostle Paul writes about “taking every thought into captivity, to the obedience of Christ.”

And the third way in which we can let the Word of Christ dwell in us, is through obedience to that Word.  If we have the right attitude, and if we fill our minds with the right thoughts, then doing what God’s word tells us to do, would only be natural.   Actually, without doing what the Word tells us t do, it’s impossible for the Word to be dwelling in us.  It’s the doing of the Word, that is the evidence of the Word dwelling in us.

James 1:22  tells us;  “But be ye doers of the Word, and not hearers only, deluding your own selves.”   If we think that we’ve got the Word dwelling in us, but aren’t obeying what the Word says, we’re deluding ourselves.  It’s impossible for the Word to dwell in us, without doing what it says.

That’s why Jesus asked the question, in  Luke 6:46;  “Why do you call Me Lord, Lord, and do not do what I say?”  We can call Jesus Lord, Lord, all day long, but if we’re not doing what He says, we’re deluding ourselves.

The final thing that the Word of God will accomplish, is to give eternal life, to all those who have remained faithful.  Going back to  Acts 20, verse 32;  Paul said;  “And now I commend you to God, and to the Word of His grace, which is able to build you up, AND to give you the inheritance, among all them that are sanctified.”

The Word of God will give us our eternal inheritance with God.   “In the beginning was the Word, and the Word was with God, and God was the Word.”  And the Word became flesh, and became the sacrifice for our sins.  And the Word creates a new creature in Christ, when we hear the word, and believe that Jesus is the Christ, the very Word of God, and when we repent of our sins, and confess the authority of the Word, and when we’re baptized for the forgiveness of our sins.  And then after we’ve remained faithfully obedient to the Word, for the rest of our lives, the Word will give us our eternal inheritance, with the Word, in heaven.