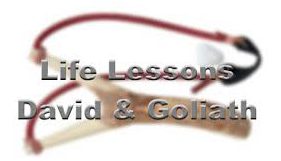 All the people of Israel, including king Saul, were afraid of Goliath the giant of the Philistines.  You know, Saul was a big man himself, especially compared to the average Israelite.  It’s estimated that the average height of an Israelite was only about five, or five and a half foot tall.  One estimate said, from five foot, to five foot three inches.  Supposed “experts” on the subject, estimate that King David was about this height, about five foot three, or maybe five foot six.  But listen to what the bible says about Saul, in  1 Samuel 9, verse 2;  “..Saul was a choice and handsome man, and there was not a more handsome person than he, among the sons of Israel.  From his shoulders and up, he was taller than any of the people.”

Another way of saying, “from his shoulders and up”, is..  “He was head and shoulders taller, than anyone else”.  In other words, the average Israelite only came up to Saul’s shoulders.   That’s how tall Saul was, but when Saul saw Goliath, he was afraid!  That’s how much bigger Goliath was.  He was probably “head and shoulders, and chest”,  probably from here on up, (signifying the lowest part of your chest) taller than even Saul.

The scripture says;  “..his height was six cubits and a span”.   We commonly think of a cubit as being eighteen inches, because at some point in time, it became “standardized” at eighteen inches.  And using that measurement, Goliath would have stood about nine foot, nine and three quarters inches tall.  Now that’s big.  But Goliath might not have been quite that tall.

You see, a cubit was the length of a man’s forearm, from the elbow, to the fingertips.  And a “span” was half a cubit, and it was measured by spreading your hand and fingers out as far as they will go.  And from the tip of your thumb, to the tip of your little finger, is about nine inches, one half a cubit.  My finger spread, and my forearm, actually do measure right about nine inches, and about eighteen inches.

But, what about a person who’s only about five foot tall?  How long is his forearm, and how wide is his finger spread?  Do you see how that would vary with different individuals?   If an ancient Israelite, whose forearm was maybe only sixteen inches long, was measuring Goliath’s height, then Goliath might have been only eight and a half feet tall.  ONLY eight and a half feet tall!  It really doesn’t matter whose forearm was used, Goliath was a giant of a man!  And Israel was afraid!

Have you ever faced a “giant” and been afraid?  I don’t mean an eight or nine foot man, but what I mean is, have you ever faced a problem, that you thought was so much bigger than you are, and there’s simply no way you could even deal with that problem, let alone overcome it?  That’s a test of our faith, isn’t it?  Who do we turn to when were face-to-face with a “giant”?  Hopefully, we turn to God.  Because when we turn to God, there’s no giant that we can’t deal with, and there’s no giant that we can’t overcome!

You can think about what might be a giant in your life, because it will vary with each one of us.  Here’s just a few things that we might face in life, that can really seem like “giants” to us.  We might face loneliness, or depression, or financial problems, or personal relationship problems.  Maybe a sense of inadequacy, or a self-worth problem, or a dozen other things.  And these problems, these “giants” can affect our faith, and our faithfulness to God, if we let them.

But if we turn to God, when we’ve got something to face, that’s much bigger than we are, we can be assured that nothing’s too big for God.  It’s like it says in  Romans 8:31;  “If God is for us, who is against us?”   When we put something up against God, it kind of loses it’s stature, it doesn’t seem quite so “big” anymore.

Back in  1 Samuel chapter 17,  “little” David comes onto the scene.  David was just a young boy, and he was tending his father’s sheep.  But his brothers were among the Israelites who were gathered for the battle against the Philistines, and so David was told to bring supplies to the camp.

And then David said, in  verse 26;  “For who is this uncircumcised Philistine, that he should taunt the armies of the living God?”   Who is this guy? .. David said.    I don’t care how big he is, he’s dealing with the armies of the living God.  In other words, “If God is for us, who is against us?”  Is this guy nuts?  Doesn’t he know who he’s dealing with.  David had faith!  That’s the difference, between his confidence, and Israel’s fear.  Faith in God, and confidence in God.

So here’s what David told king Saul, in  verse 32;  “Let no man’s heart fail, on account of him (on account of Goliath).  Your servant (David) will go and fight with this Philistine.”  Then Saul said, in  verse 33;  “You are not able to go against this Philistine to fight with him.  For you are a youth, while he has been a warrior FROM his youth.”

But here’s how David answers, and here’s how he explains his confidence, in  verses 34 thru 37;  (read verses..)

So David goes ahead and confronts Goliath.  Saul tries to dress him up with all the armor that was common to wear, but David couldn’t even walk with all that armor on, and so he throws it off.  And it says in  verse 40;  “And he took his stick in his hand, and choose for himself five smooth stones from the brook, and put them in the shepherd’s bag which he had, even his pouch, and his sling was in his hand, and he approached the Philistine.”

And then the bible says that Goliath had disdain for David, because he had the nerve to approach him like that.  And listen to  verses 43 thru 47..

“Then David said to the Philistine;  You come to me with a sword, and a spear, and a javelin, but I come to you in the name of the Lord of hosts, the God of the armies of Israel, whom you have taunted.”  A giant can come to you in whatever fashion, and it can taunt your faith, but it doesn’t matter, if You’ve got God by your side.

Now listen to what David said to this giant..  “This day, the Lord will deliver you up into my hands, and I will strike you down, and remove your head from you.  And I will give the dead bodies of the army of the Philistines this day, to the birds of the sky, and the wild beasts of the earth, that all the earth may know that there is a God in Israel, and that all this assembly may know that the Lord does not deliver by sword or spear;  For the battle is the Lord’s, and He will give you, into our hands.”

That reminded me of another verse that I heard, so I looked it up, and it was from  Ecclesiastes 9, verse 11;  “I again saw under the sun, that the race is not to the swift, and the battle is not to the warriors, and neither is bread to the wise, nor wealth to the discerning, nor favor to men of ability;  For time and chance overtake them all.”

Well, I guess you could say that time and chance came upon Goliath that day, because when he taunted Israel, he taunted God.  And God used a small boy named David, to answer that taunt.

So then it doesn’t matter how big or small YOU might be.  Or how strong or how weak you might be, physically.  When you face the giants that come along in your life, and they “taunt” your faith, and they “taunt” your confidence, know that nothing is bigger, or stronger than you are, when you’ve got God by your side.

Our closing hymn is #40, and it’s called “Does Jesus Care?”  And I asked that we sing this song because it talks about things that we struggle with in life, and in the second verse it mentions “some nameless dread and fear”.  And those are the kind of things that we face, that can sometimes seem like “giants” to us.  And we think that we can’t overcome them, but we can.  And the reason that we can overcome them, is because Jesus cares.  And Jesus has died for us, and He’s been resurrected for us, and He lives eternally for us.

And as the apostle Paul wrote in  Philippians 4:13;  “I can do all things in Him who strengthens me.”

And then, all those giants don’t stand a chance.