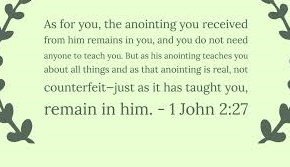 How Are Christians Anointed ?

Last week I talked about the various ways in which Jesus was anointed.  But today I want to talk specifically about how Christians are anointed.

“As for you, the anointing which you received from Him, abides in you.  And you have no need for anyone to teach you, indeed the anointing teaches you about all things, and it is true, and is not a lie.  And just as it has taught you, abide in Him.”

Now that verse is talking about something different, than being chosen, and appointed to a position in the kingdom.  That verse says that “the anointing” is something that “abides in you”.  What is it, that abides in a Christian?  What is it that teaches us all things?  And what is it that is true, and not a lie?

Let’s hear that verse again;  “As for you, the anointing which you received from Him, abides in you.  And you have no need for anyone to teach you, indeed the anointing teaches you about all things, and it is true, and is not a lie. And just as it has taught you, (just as the anointing has taught you) abide in Him.”   We all know perfectly well, what it is that abides in us, and what it is that teaches us all things, and what it is, which is true.  It’s the word of God.  The word of God, is “the anointing” from God.  God “fattens us”.  He fattens OUR spirit, with the word of HIS Spirit.

So then, there’s two ways in which the Christian is  “anointed by God”.  The first way that God anoints us, is by “choosing” us to be saved, because we have chosen to follow His word;  And thus God “appoints” for us a position in the kingdom.  And the second way that God anoints us, is through His word, which dwells in us.  And His word “fattens us” with the knowledge and the blessings of God, and of Jesus Christ.

Our “anointing” is not some miraculous gift that God has given to us.  Pentecostals, and those of similar beliefs, think that unless you’ve been given some miraculous “gift” from the Holy Spirit, that you haven’t been “anointed” by God.  As a matter of fact, they think that you haven’t even been fully accepted by God, unless you’ve received a miraculous “gift” of the Spirit.  But that is NOT what the bible says!  As a matter of fact, that is contrary to what the bible says!

But the scripture says that the “anointing”, which teaches you all things, it “abides in you”!  It’s not going to be “done away”.

When you study the scriptures, and when you study the true meaning of the words and phrases that the scriptures use, you see that being “anointed by God” has nothing to do with anything miraculous.  It has to do with us, taking the word which God has given to us, and living in obedience to it, every day of our lives, and thereby allowing it to abide in us, (to dwell in us) and to “fatten” our spirit.

Believe me..  You do not want, a scrawny, skinny, weakly spirit.  You want your spirit to be “fattened” with the word of God, and with the blessings that the word gives you.  When it comes to our spirit, which is our very soul, we all need to be “fattened”, just as much as we possibly can be.

Jesus Was Anointed WITH the Holy Spirit

But nowhere in the scriptures, does it say that Christians are “anointed” with the Holy Spirit Himself.  God has surely “anointed us”, but He has anointed us, with the “word of the Spirit”, and with the power of that word.   The apostle Paul wrote in  Romans 1, verse 16;  “For I am not ashamed of the gospel (the gospel is the word of the Spirit) for it is the POWER of God, for salvation, to all those who believe;  To the Jew first, and also to the Greek.”

Don’t be misled, and confused by the words of man, when they tell you something different from what the bible tells you.  But rather, BELIEVE the words of God.  And if believing the words of God, requires you to make an adjustment to your “theology” then so be it;  Make that adjustment, and believe the word, and live by it!

Christians Anointed with the WORD of the Spirit

And just so that we have this crystal clear in our minds, let me give you a quick analogy.  Suppose a husband gives his wife a ring, as a present..   He gives it to her as “a gift”.  And the wife takes the ring, and she puts it on her finger.  And she shows the ring to her friend, and she says;  “Look, my husband gave me this ring on my finger.”  Now, her husband may not have actually put the ring on her finger, but he gave it to her, nonetheless.

In  2 Corinthians 1, verse 22,  this “pledge” is called, “The earnest of the Spirit”.  It’s like “earnest money” that someone puts down, towards the purchase of a house.  The “earnest money” serves as a pledge, or as a guarantee, of the total payment to come later on.

The very same thing is true of the “earnest of the Spirit”.  The “spirit”, or in other words, the word of God, which dwells in our hearts, and which gives “life” to our spirits, and which is evidenced, by the life we live as a Christian, serves as the pledge, or as the guarantee, of the eternal life to be given to us later on.

“..You have no need for anyone to teach you, indeed the anointing (the word in your hearts) teaches you about ALL things..”

Listen to what  2 Peter 1, verse 3  says;  “Seeing that His divine power has granted to us everything, pertaining to life and godliness, through the true knowledge of Him who called us by His own glory and excellence.”

We have no need to be taught by anyone, because the word has already taught us.  Peter says we’ve been taught, “through the TRUE knowledge of Him who called us..”  And John says;  “..the anointing teaches you all things, and is TRUE..”  And then John says;  “..and just as it has taught you, abide in Him”.  And it was also John who said, in 2 John verse 9;  “..the one who abides in the teaching, has both the Father and the Son.”

We are anointed by God, with the word of His Spirit, which dwells in us.  The “anointing” isn’t anything miraculous.  It’s 100% our choice to allow God’s word to dwell in us.  It is God’s wonderful grace, which is His kindness and mercy, that offers us the word of the Spirit.  And when out of faith, we take that word and put it in our hearts, through obedience to it, we are then “anointed” by the word, and by God.   Through our obedience to the word, we have been chosen by God, and accepted by God, and appointed a place in the kingdom, and we are “made fat” with His blessings.

I hope this helps you to understand exactly how we are “anointed by God”.

There’s nothing mysterious about God’s word is there?  It just takes a little study, and a lot of faith.  Faith that Jesus is the Christ.  And faith that if we confess that fact, then Christ will confess us before the Father who is in heaven.  And it takes faith to turn from the world, and turn to God;  That’s repentance.  It takes faith, to allow yourself to be buried in baptism, believing that in doing so, God will forgive your sins, and add you to His kingdom.  And of course it takes a lot of faith, every day of our life, to allow the words of the Spirit to dwell in us, and to guide us, and even to rebuke us when needed.

It takes simple trusting faith, in the word of God, which anoints us.