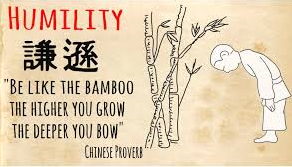 In  Mathew chapter 19,  Jesus was teaching about giving things up, making a sacrifice, and taking a back seat, so to speak.  That’s the chapter where a young man came to Jesus, and he asked Jesus;  “Teacher, what GOOD THING shall I do that I may obtain eternal life?”  (Mathew 19, verse 16)  And Jesus answered, and said in  verse 17;  “Why are you asking Me about what is good?  There is only One who is good;  But if you wish to enter into life, keep the commandments.”

Jesus answered, and said in  verse 21;  “If you want to be perfect, go and sell what you have, and give to the poor, and you will have treasure in heaven;  And come, follow Me.”  Jesus was asking that man to give up quite a bit, because he was pretty well-off.   And Jesus was really telling the young man to do three things;  He was telling him to practice humility, and to sacrifice, and to serve others.

Selling your possessions, and giving the proceeds to the poor, involves humbling yourself, and sacrificing something you possess, and using that sacrifice to serve others.  The part about sacrificing is easy to see.  Obviously it’s a sacrifice to sell everything that you have, and give the money to the poor.  But the part about humility might not be quite so obvious, but it’s there just the same.

Probably 90% of the time, along with possessions, comes pride, and along with pride, comes a feeling of importance, and an elevating of yourself, above others.  And it might not always be a conscious elevation of self, it might be just occur sub-consciously.  And although I know it doesn’t happen 100% of the time, I know it happens the great majority of the time, because Jesus says it does.  Jesus says in  Mathew 19:24; “Again I say to you, it is easier for a camel to go through the eye of a needle, than for a rich man to enter the kingdom of God.”

With riches comes pride, but to give away your riches, requires great humility.  It involves lowering your “status”, you might say.  It requires putting the well-being of others, ahead of your self.  And the simple fact that you ARE putting others before yourself, and that you ARE making that sacrifice, is a sign of humility.

And so when Jesus told the young man to “sell what you have and give to the poor”, He was telling him to humble himself, and to sacrifice.  Don’t be caught up in that deception of pride.

The Lesson of Giving

In  1 Corinthians 16, verse 1 & 2,  when God gave us the example of giving, on the first day of the week, He was giving us an exercise to do every week.  It’s an exercise to help strengthen us in our attitude of humility, and in our willingness to sacrifice, and in serving others, through our giving.   And although there is certainly “good” that is done for others, through the use of the money that we collect in the offering every week, I think there might be even more “good”, that is done for us, the givers, in teaching us the very needful lesson on humility, and on sacrifice.

And of course that’s why when we give upon the first day of the week, we must give to the point that it becomes a sacrifice for us.  If our giving is going to be the kind of giving, that is acceptable to the Lord, it must be a sacrifice.

And that’s why the bible recounts the story of the widow, who put just two mites, into the treasury in the temple, when she came to worship God.  Two mites were worth about the same as the smallest of Roman coins at that time.

The story is told in  Luke 21, verses 1 thru 4,  and here’s what it says;  “And He looked up, (Jesus looked up from speaking to His disciples) and saw the rich men casting their gifts into the treasury.   Then He saw a certain poor widow, putting in two small coins.  And He said, (to His disciples again)  “Truly I say to you, this poor widow put in more than all of them;   “For they, all out of their surplus, put into the offering;  But she, out of her poverty, put in all that she had to live on.”

And so there’s the difference right there;  While most people probably give to God, an amount which they’re comfortable with, and which they’ll probably never even notice is gone, others, out of deeper faith, make a sacrifice when they give.  And the Lord says that that giving, even though it may be smaller in dollar amount, is “more” than all the rest.  It all depends on whether or not the giving, is a sacrifice.

You might say, the poor widow gave “more sacrifice”.   And that very expression, “more sacrifice”, is used in the scriptures, in  Hebrews chapter 11,  the chapter on faith.   Hebrews 11, verse 4  says;  “By faith, Abel offered unto God more sacrifice than Cain, by which he obtained witness that he was righteous, God testifying of his gifts;  And by it (by the testimony of God)  he being dead, yet speaketh.”

Most versions, like the KJV say;  “By faith, Abel offered unto God, a more excellent sacrifice than Cain..”  And that’s the precise meaning here.   That word “more”, that’s used there, can mean either more in quality, or more in quantity.  And in this verse, it means more in quality, in other words, it means “more excellence”.   And that’s what our faith causes us to do;  It causes us to offer more excellent sacrifices, and better sacrifices, because they are more precisely in line with the instructions from God.

I wonder if we all realize how talking about this subject like we’re doing, illustrates to us, just how blessed we are?  I mean, we could be blessed so little, that giving anything at all, would be a sacrifice, just like it was for that poor widow.  But that’s really not the case with us, is it?  The fact is, that we are blessed so much, that sometimes, we could actually give quite a bit, and yet be very comfortable doing it.  In other words, it wouldn’t be a sacrifice at all!  That’s how blessed we are, and we need to be thankful for it.

If You Would be Perfect (or complete)

But let me get back to the story of that “very blessed” young man, who confronted Jesus, wanting to know what he needed to do, in order to obtain eternal life.

You’ll remember that Jesus told him, in  Mathew 19, verse 21;   “If you want to be perfect, go and sell what you have, and give to the poor, and you will have treasure in heaven;  And come, follow Me.”

But  Verse 22  says;  “But when the young man heard that saying, he went away sorrowful, for he had great possessions.”

Evidently, all those great possessions, had caused that young man to be plagued by the sin of.. “I, me, mine”.  The one we talked about just last week.

But it’s not just him, no one wants to give up the things that they have. We like our possessions, and we want to keep them. And so a good challenge for us to take, is to consider all the things that we possess;  And then think very honestly with ourselves, and consider what we would do, if WE, were asked to give up all that we have.

What would you do?  What would you do if Jesus confronted you with that choice? Would you simply have to go away sorrowful, because there’s no way that you’d actually give up everything that you own, in order to follow Christ?  It’s pretty unlikely that you or I would ever be confronted with that choice, but the point is.. We need to be sure of our attitude towards these things, so that they won’t be the cause of our “undoing” when we face the judgment.

Are we ourselves guilty of the sin of.. “I, me, mine”, without even realizing it?  Ask yourself;  Do I consider all the things that are “mine”, to simply a bunch of things that God has allowed me to have, and even though they make my life easier and more comfortable, I could just as easily do without them, if I had to?

Or, have all the things that are “mine”, actually become, “who I am”?  And to part with them, would be just like tearing off a part of yourself, and throwing it away?

I think that’s how it must have been with the rich young man.  His possessions had become so much a part of who he was, that he couldn’t do without them.  They were a part of him!

Here’s something I read just a day or two ago;  “If you lost everything that you have, everything.. You might finally realize, that God is really everything you need.”

How Much Would You Give Up For God ?

After hearing the exchange between Jesus and the wealthy young man, the scripture says that the disciples were “astonished exceedingly”.  (Mathew 19, verse 25)

So Peter said to Jesus, in  verse 27;  “Behold, we have left everything and followed You;  What then will there be for us?” And listen to how Jesus answers, in the next three verses;

Jesus said to them; (He’s talking to Peter and to the rest of the apostles) “Assuredly I say to you, that in the regeneration, (“the regeneration” means..  “the new birth”)   So then..  In the new birth, in the kingdom of Christ..  “when the Son of Man sits on the throne of His glory, you who have followed Me, will also sit on twelve thrones, judging the twelve tribes of Israel.”

The apostles were given both authority and power, when Jesus came in His kingdom.  The apostles were directly led by the Holy Spirit of God.  Jesus told them, in  Acts 1, verse 8;  “But you shall receive power, after the Holy Ghost is come upon you:  And ye shall be witnesses unto Me, both in Jerusalem, and in all Judaea, and in Samaria, and unto the uttermost part of the earth.”

Jesus said to His apostles, in  John 14:26;  “But the Comforter, which is the Holy Ghost, whom the Father will send in My name, the same shall teach you all things, and bring all things to your remembrance, whatsoever I have said unto you.”

And speaking of when the apostles would be persecuted, and be brought before rulers, for their faith, Jesus told them in  Luke 12:12;  “For the Holy Ghost shall teach you, in the same hour what ye ought to say.”

And so all those things were a part of what the apostles would receive for following Jesus.  That was Peter’s question..  “What then will there be for us?”   So then those things are all a part of what would be for them.  Not necessarily for us, but for them!

Now here’s what specifically applies to us, and to everyone..  Jesus said, in  Mathew 19, verses 29 & 30;  “And everyone, that hath forsaken houses, or brethren, or sisters, or father, or mother, or wife, or children, or lands, for my name’s sake, shall receive an hundredfold, and shall inherit everlasting life.   But many that are first shall be last;  And the last shall be first.”

And so may we all become “last”, through our humility and through our sacrifice, and in serving others, so that we may become “first” in the eyes of God.