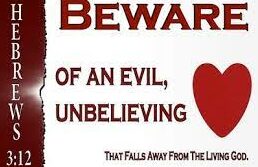 The Evil of Unbelief

The word “unbelief” is only used 16 times in the KJV of the bible, and only in the new testament.  But yet, unbelief, is the probably the most harmful characteristic that a person can possess.  And unbelief, will probably cause more people to be lost, than anything else.

And that’s exactly how it is with so many other verses of scripture, that are simply statements of fact.  Like the plain statement of fact, that “Jesus is the Christ, the Son of the living God.”

You’re not going to properly interpret other verses of scripture, that are dependent on the fact that Jesus is the Christ, and that Jesus is deity, unless you believe that one verse.  People have come up with almost countless false beliefs, and false teachings, because they don’t BELIEVE that Jesus is the Christ.   Just consider the whole present day Jewish faith.  The whole bible is misunderstood, and misinterpreted, simply because of the unbelief, of that one bible fact.  It’s a fact that you simply must accept, and believe, if you’re going to properly interpret the rest of the bible, and if you’re going to be saved.

What about all the false beliefs, and all the false teachings, concerning the subject of baptism.  All those wrong interpretations, are the result of not believing a couple of plain statements of fact.  Like the statement by Jesus Himself, in  Mark 16:16,  which says;  “He who has believed, and has been baptized, shall be saved..”   All you’ve got to do is believe that one simple statement of fact, and you’ll be able to properly interpret so many other verses of scripture, that deal with the subject of baptism.   But if you’re stuck in unbelief, then you’ll no doubt misinterpret several other verses of scripture, that dal with baptism.  And it’s all because of unbelief, in regards to a simple statement of fact.

And there seems to be no end, to the wrong interpretations of bible subjects, that are the result of simply not believing other plain statements of fact.

Like for instance, what about the subject of our resurrection bodies.  So many people continue to hold the false belief, that our present physical body will be resurrected, and be brought to heaven.  And I suppose it really doesn’t mater what people may think about that, we’ll all find out in the resurrection anyway.  But the point is, that if everyone would simply believe the plain statement of fact, from the bible about this subject, then there would be any misunderstandings, and there wouldn’t be any false teachings, and false beliefs.

The bible makes the clear statement of fact, in  1 Corinthians 15, verse 44,  which says;  “It is sown a natural body, it is raised a spiritual body.”   There’s nothing complicated about that;  It’s just a clear statement of fact.  A natural physical body is buried, and a spiritual body is raised.  It would sure save a lot of time debating and arguing, if people would simply believe what the bible so plainly states.  And it would make for such a more unified, body of believers.

1 Corinthians 15, verse 50,  is a statement that’s just as clear as that last one.  It says;  “Now this I say, brethren, that flesh and blood CANNOT inherit the kingdom of God; neither doth corruption inherit incorruption.”  What could be plainer than that.

Here’s a strange one that I heard just last week;  The bible says in  1 John 3, verse 12;  “Not as Cain, who was OF that wicked one, and slew his brother.  And wherefore slew he him?  Because his own works were evil, and his brother’s righteous.”   Well, quite a few people actually believe, that satan sired Cain, and that Cain was not the offspring of Adam!   I told you this was a strange one.  Cain was OF the wicked one.  People have said;  Adam wasn’t the “wicked one” was he?