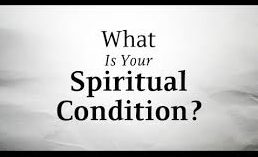 Are You in as Good a Condition, as You Used to be ?

Suppose you needed to buy a car, but you didn’t have much money, you’d probably have to look for an older car, that didn’t cost so much.  But then you’d have to worry about what condition it would be in.  So you find someone advertising an old car, and you ask him;  How does it run?  And the person answers and says;  Oh boy, I remember when this car was new, it ran great!  And you ask him;  Does it start OK in the winter?  And the person says;  Boy, this car used to start right up, summer or winter!  And then you ask;  Well, how are the brakes?  And the guy says;  This car used to stop on a dime!

You know, Christianity is like that.  It doesn’t matter what your spiritual condition used to be;  It only matters what condition you’re in now.  You could have been lost in sin yesterday, but that doesn’t matter, if you’re saved today.  We’re told in  Ezekiel 18, verse 21;  “But if the wicked man turns from all his sins which he has committed, and observes all My statutes, and practices justice and righteousness, he shall surely live;  He shall not die.”

Isn’t that good to know?  No matter what sins you’ve committed, you can always turn from sin, and turn to God, and He will forgive you.  Jesus said, in the parable of the prodigal son;  “..For this brother of yours was dead, and is alive, and was lost, and has been found.”   (Luke 15:32).   Your spiritual condition can go from being lost in sin, to being found in Christ, and saved, simply because you’ve decided to obey the Lord.

It says in  Ezekiel 18, verse 22;  “All his transgressions which he has committed, will not be remembered against him.  Because of his righteousness which he ahs practiced, he will live.”  Verse 23  says;  “Do I have any pleasure in the death of the wicked, declares the Lord?  Rather, (or, “is it not”) that he should turn from his ways and live?

Isn’t that what the Lord has pleasure in?  Yes it is.   1 Timothy 2, verse 4  tells us that God, “desires all persons, to be saved, and to come to the knowledge of the truth.”   That’s why the gospel is called the gospel, because it’s the “good news”, that everyone, can be saved, simply by obeying God.  It doesn’t matter one bit, what condition you were in yesterday;  It only matter what condition you’re in now!

But here’s something else that we really need to know.  And this is a fact, because the bible says so.   You could have been completely forgiven of your sins, and you could have been saved yesterday, but that won’t matter, if you’re not saved today.

That’s kind of sad, isn’t it.  But it’s true.  A lot of people don’t want to admit it, but the bible says it’s true.  “..All the righteous deeds which he has done, will not be remembered..    for his sins which he has committed, for them he will die!”

How would you like to receive a letter from the Lord, and when you read it, it said;  “I know your deeds, that you have a name, that you are alive, but you are dead!”   Wow!  No thanks!   But that really happened.  It happened to a congregation of the Lord, in the city of Sardis, in the first century.  That’s what the bible says in  Revelation 3, verse 1.

They were kind of like that old car;  When they were “new”, Boy they were in good condition?  They were going so strong, that they had a reputation for their deeds.  They “had a name, that they were alive”.   People knew about them.  But what happened?  The Lord said, they weren’t alive any more;  They died.  Maybe it wasn’t all at once, it probably wasn’t.  It was probably a slow death;  So slow I suppose, that they didn’t even know what was happening.  But they died.  The last thing they knew, they were in really good condition.

Jesus said to the congregation at Ephesus, in  chapter 2, verses 4 & 5;  “But I have this against you;  You have left you first love.”  (the love which they had, when they first became Christians;  It was gone, they somehow left it behind)  “Remember therefore, from where you have fallen, and repent, and do the deeds you did at first;  Or else I am coming to you, and will remove your lampstand out of it’s place;  Unless you repent!”

Sobering words, aren’t they?  They would lose their place in the kingdom, unless they repent!

Are You Saved Today ?

You know what?  If there is a need to repent, don’t be afraid to admit it to yourself.  It just means you’re human that’s all.  “If we say we have no sin, we deceive ourselves, and the truth is not in us.”   1 John 1:8.   All humans have sins.  But, “If we confess our sins, He is faithful and righteous to forgive us our sins, and to cleanse us from all unrighteousness.”  Verse 9.

Probably, most of time, our confession needs only to be, before our Father in heaven, not in front of other people.  We need to confess our faith openly, in front of anyone who might be there.  But our sins, they’re probably a lot more private.  Or at least I hope they would be.  Maybe we need to take the advice of Jesus, that He gave in  Mathew 6, verse 6.  Here’s what He said;  “But you, when you pray, go into your inner room, and when you have shut your door, pray to your Father who is in secret;  And your Father who sees in secret, will repay you.”

Just you, and your heavenly Father, and His Son.

Do you have the same zeal, and enthusiasm for God, that you did when you first became a Christian?  I hope you’ve got at least that much!  But if you don’t, then you need to repent.  Has your love for the word, and your love for working in God’s church, somehow become only lukewarm, like the people from the congregation in Laodicea?  We might be tempted to think that lukewarm aint’ so bad.  But it is bad.  It’s so bad, that the Lord would just as soon, “spit you out of His mouth”.   Revelation 3:16.

The apostle Paul, wrote to Timothy, in  2 Timothy 1, verse 6;  “I am mindful of the sincere faith within you, which first dwelt in your grandmother Lois, and you mother Eunice, and I am sure that is you as well.”  And you can be sure that God is mindful of your faith!  But we all need to be stirred up.  Paul said to Timothy;  And for this reason, I remind you to kindle afresh, the gift of God which is in you, through the laying on of my hands.”

Paul, as an apostle of Jesus, had laid his hands on Timothy, and had imparted to him, a miraculous spiritual gift.  And he wanted Timothy to be stirred up, to use his gift.  Well, we don’t have any miraculous gifts from God, but we do have the greatest gift of all.  And that is the love for God, and the love for His word, which is the result of faith.  And our faith comes form just one source.  “Faith comes by hearing the word of God.”  Romans 10:17.

But we need to stir up that faith, stir up our enthusiasm, and our zeal, and do the deeds that we need to be doing, and grow.  Did you have more enthusiasm to grow spiritually, when you first became a Christian, than you do now?  We are reminded, and stirred up, by  1 Peter 2, verse 2,  which says;  “Like newborn babes..”  (just like when you were first, “born-again”)  “..LONG for the pure milk of the word!  That by it, you may GROW in respect to salvation.”

Verse 5  says;  “You also, as living stones, are being built up as a spiritual house, for a holy priesthood, to offer up spiritual sacrifices, acceptable to God through Jesus Christ.”

Let’s leave it just like that, and let’s think about the question;  What is my spiritual condition, today?