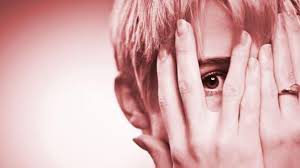 Have you ever felt embarrassed, and blushed because of it?  Listen to what an encyclopedia says about blushing;

To blush at innuendo (or suggestion) is to show awareness of its implications and to display modesty that conveys that you are not brazen or shameless.

The blush provides a particularly effective signal, because it is involuntary and uncontrollable.”

Listen to what the bible says there, in  Jeremiah 6:15;   “We’re they ashamed when they had committed abomination?  No!  Not at all were they ashamed, nor did they even know how to blush!  Therefore they shall fall, among those who fall.  At the time I punish them, they shall be cast down, saith the Lord.”

Listen to what the prophet Ezra wrote, in  Ezra 9, verses 5 & 6;  “But at the evening offering, I arose from my humiliation, even with my garment and my robe torn, and I fell on my knees, and stretched out my palms to the Lord my God;  And I said, O my God, I am ashamed and embarrassed to lift up my face to Thee My God.  For OUR iniquities have risen higher than our heads, and OUR guilt has grown even to the heavens.”

Ezra wasn’t only ashamed of himself, but he was ashamed of the whole nation of Israel!   You might say;  Well I’m ashamed of a lot of people around me, but I’m not ashamed of myself.  But God tells us to “take heed”!   The bible says in  1 Corinthians 10, verse 12;  “Therefore, the one thinking he stands, take heed, lest he fall.”

We need to take heed, because maybe we SHOULD be feeling embarrassment, and shame and guilt, but maybe we simply don’t know HOW to blush.  Or maybe we’ve forgotten how.

There’s only one thing in this whole wide world, that even makes the world tolerable, and that makes it of any value at all.  And that one thing is, a Christian.  Or even better, a whole bunch of Christians.

Well, then the Lord exacts judgment, that’s what happens.  And that’s exactly what happened to the nation of Israel.  I already read to you,  Jeremiah 6:15,  which said;  “..they did not even know how to blush.”  But let me read from  verse 6,  down thru  verse 15.  Listen to what happens to a nation that shamelessly conforms to the world.

Jeremiah 6,  beginning with  verse 6;   “For thus says the Lord of hosts;  Cut down her trees, and cast up a siege against Jerusalem!  this is the city to be punished, in whose midst there is only oppression.  As a well keeps cold it’s waters, so she, keeps cold her wickedness.  Violence and destruction are heard in her, sickness and wounds are ever before Me.  Be warned, O Jerusalem, lest I be alienated from you, lest I make you a desolation, a land not inhabited.”

I’m going to jump to  verse 10  now;  “To whom shall I speak and give warning, that they may hear?  Behold, their ears are uncircumcised (in other words, their ears are covered) and they cannot listen.”  Circumcision is an “uncovering”, and an “exposing”.   We need to uncover our ears, and expose them to the words of God, if we ever expect to be saved.  And that’s also what the bible says about our hearts;  Our hearts have to be opened to the word of God.

Listen to  Romans 2, verses 28 & 29;  “For he is not a Jew who is one outwardly..”  For about two thousand years, beginning with Abraham, physical circumcision was an outward sign that a man was in a covenant relation with God;  But that hasn’t been true now, for the past two thousand years, ever since the kingdom of Christ came.

“For he is not a Jew who is one outwardly;  Neither is circumcision that which is outward in the flesh.  But he is  Jew, who is one inwardly;  And circumcision is that which is of the HEART, by the Spirit, not by the letter (in other words, not because of the old law of Moses.  That’s what is referred to as “the letter”)  And his praise is not from men, but from God.”

“Circumcision is that which is of the heart, by the Spirit..”   How can your heart become “circumcised”, by the Spirit?   What does that mean?  Well, once again, circumcision is an “uncovering”, and an exposing”.  Our hearts need to be “uncovered” and “open”, and “exposed”, and “unshielded”, so that the word of God can freely enter.  The word of God is the Spirit of God.  That’s what Jesus said;  “The Words that I have spoken to you, are Spirit, and are life.”   John 6:63.

When you accept the words of the bible as the truth from God, you are “uncovering”, and “exposing” your heart to God.  And when you allow the word of God into your heart like that, then the Spirit is “circumcising” your heart.  The word of God is “cutting away” the stubbornness from your heart;  The self-will, the demand to have things your way disappears, uncovering your heart, and opening it to the truth.

So the prophet Jeremiah spoke these words of the Lord;  “To whom shall I speak and give warning, that they may hear?  Behold their ears are uncircumcised and they cannot listen.”   That’s how people are today.  Their ears are covered, when it comes to hearing the word of God.  God tells us how to conduct ourselves.  He tells us how to speak.  “Let no unwholesome word proceed from your mouth, but only such as is good for edification, according to the need, that it may give grace to those who hear.”  Ephesians 4:29.

But are people’s ears open to that command?  Not for the majority of people.  And are they ashamed when their speech is rotten?  That’s what the word “unwholesome” means.  It means “rotten”;  Rotten language, but you’d think no one knows how to blush.

Jeremiah said;   “Behold, the word of the Lord has become a reproach to them.  They have no delight in it.”   What does the word say about how we dress?  Does it say, Let’s see how close to naked we can get when the weather gets hot?   The weather’s gonna be getting warm soon, and then hot.  How are you gonna dress?

The apostle Paul wrote, in  1 Timothy 2, verse 9;  “Women should adorn themselves in decent clothing  (obviously some clothing is decent and some is indecent)  You know, it says in  Proverbs 7, verse 10;  “And behold a woman comes to meet him, dressed as a harlot, and cunning of heart.”  There is obviously a way to dress, that makes one look like a harlot.  That’s not decent.

Let me remind you of a verse in  1 Corinthians 6:18 & 19;  “Flee immorality!  Every sin that a man commits (or a woman) is outside the body, but the immoral person, sins against his own body.  Or do you not know, that your body is a temple of the Holy Spirit who is in you, whom you have from God, and that you are not your own?”

Your body is a temple, but that doesn’t mean that you should open it up for public worship.

“But the word of the Lord has become a reproach to them, they have no delight in it.”  And, “Were they ashamed because of the abomination they have done?  They were not even ashamed at all.  They didn’t even know how to blush.”

And so the Lord says, in  Jeremiah 6, verses 11 & 12;   “But I am full of the wrath of the Lord.  I am weary of holding it in.  Pour it out, on the children of the street, and on the gathering of young men together.  For both husband and wife shall be taken. The aged with fulness of days.  And their houses shall be turned over to others.  Their fields and their wives together, for I will stretch out My hand against the inhabitants of the land, declares the Lord.”

And verses 13 & 14  say;  “For from the least of them, even to the greatest of them, everyone is greedy for gain, and from the prophet even to the priest, everyone deals falsely;  And they have healed the brokenness of My people superficially, saying peace, peace, when there is no peace.”

Do you know how even the prophet and the priest deals falsely?  And do you know how they only heal God’s people superficially, saying peace, peace, when there is no peace?

Today’s prophets and priests are our preachers and our teachers.  And when they tell everyone that everything is OK, that everything is peace and safety, they’re dealing falsely.  Because everything is NOT OK!  And everything is NOT peaceful, and alright.   And do you know what the scripture means when it says “they have healed the brokenness of My people superficially”?  The KJ says “slightly”.  The real meaning is that they have “slighted” the people, and they’ve treated them “with contempt”, because they haven’t told them the truth!  Everything is not OK!

People don’t know how to blush.  Their ears are covered, so that they can’t listen.  They don’t have any shamefacedness.  “The word of the Lord has become a reproach to them;  They have no delight in it.”  All those things need to change!  You know, all I really focused on was bad language, and immodest dress.  But what about immoral lifestyles, and shameful treatment of others?  What about covetousness?  What about the habit of lying, as if it simply doesn’t matter?

One more passage of scripture;  Ephesians 5, verses 3 thru 8;  “But do not let immorality or any impurity or greed even be named among you, as is proper among the saints.  And filthiness and silly talk, or coarse jesting, which are not fitting, but rather, giving of thanks.  For this you know with certainty, that no immoral or impure person, or covetous man, who is an idolater, has an inheritance in the kingdom of Christ and God.”

“Let no one deceive you with empty words;  for because of these things, the wrath of God comes upon the sons of disobedience.  Therefore, do not be partakers with them.  For you were formerly darkness, but now you are light in the Lord;  Walk as children of light.”

May your ears, and your heart, be circumcised by the Spirit of God, which is the word of God.  Hear the word, and believe the word.  Confess your faith in Jesus Christ, repent of your sins, and be baptized for the forgiveness of your sins.  And then, endure;  Live faithfully unto death, and receive the promise of eternal life, from the Lord.