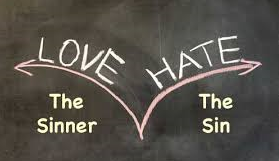 Is It Biblical to Love the Sinner, and Hate the Sin ?

I believe the saying was first attributed to a man named Augustine, who was often called St. Augustine, because he was a Roman Catholic.  He lived between 354 and 430 AD.   It’s said that in a letter to a commune of nuns, he encouraged them to “Act with love for persons, and hatred for sin”.

Another person who was known for commenting on the idea of loving the sinner, but hating the sin, was Mahatma Gandhi.   In 1929, Gandhi wrote in his autobiography;  “Hate the sin and not the sinner, is a precept, which though easy enough to understand, is rarely practiced, and that is why the poison of hatred, spreads in the world.”

Whichever it was, I believe he’s right about one thing;  Hatred is so widespread around the world, because it is RARELY practiced!   And I believe that fact has never been more evident in this country, than it is right now, as we see people literally hating one another, because they have a different opinion, one from the other.

People on both sides of the political aisle, are literally wanting to kill one another, for the beliefs that they hold.  And what’s really sad, is that it’s not much different with a lot of so called “religious people”.

What Matters is What the Bible Says

But let me read to you a bible passage.  This is what it says in  Romans 12, verses 9 thru 20;  “Let love be without hypocrisy.  (love your fellow man, right?)  Abhor that which is evil (hate sin)  Cleave to that which is good  (love righteousness, right?)

“In love of the brethren, be tenderly affectioned, one to another, in honor, preferring one another.”  (In other words, put the other person ahead of yourself)  “In diligence, not slothful;  Fervent in spirit, serving the Lord;  Rejoicing in hope, patient in tribulation, continuing steadfastly in prayer;  Communicating to the necessities of the saints, given to hospitality.”

“Bless them that curse you, bless and curse not.”  (it would be a sin for someone to curse you;  So then again, love the sinner)  “Rejoice with them that rejoice, weep with them that weep.  Be of the same mind toward one another.  Set not your mind on high things, but condescend to things that are lowly.” (that has to do with pride, doesn’t it?)  Be not wise in your own conceits.”

“Render to no man, evil for evil.  Take thought for things honorable in the sight of all men.”  (If someone sins against you, don’t sin back at them)  If it be possible, as much as lies within you, be at peace with all men.  Avenge not yourselves, beloved, but give place unto the wrath of God;  For it is written, Vengeance belongeth to Me, I will recompense, saith the Lord.”

“But if thine enemy hungers, feed him;  If he thirsts, give him to drink;  For in doing so, you shall heap coals of fire upon his head.  Be not overcome of evil, but overcome evil with good.”

Have you ever wondered about the phrase, “you shall heap coals of fire upon his head”?   It’s actually a quote from  Proverbs 25, verses 21 & 22;  Here’s what it says in Proverbs;  “If thine enemy be hungry, give him bread to eat.  And if he be thirsty, give him water to drink.  For thou will heap coals of fire upon his head, and Jehovah will reward thee.”

Well, in a way He does.  The last verse that we rad from Romans says;  “Be not overcome with evil, but overcome evil with good.”  That’s what you’re doing when you do good to your enemy.  You’re overcoming evil with good.  Did you ever hear the phrase, “Kill ’em with kindness”?   To “heap coals of fire upon his head”, is about the same as “killing him with kindness”.

A lot of times, when someone does something bad to you, he WANTS you to do something bad in return.  By returning good for evil, you’re going to make your enemy feel his guilt.  His own conscience is going to hurt him, probably worse than anything else you could do to him.

We Are All Guilty Of Sin

The idea of loving sinners, is expressed over and over again in the bible.  The fact of the matter is, everyone is a sinner, and we are instructed to love everyone.  The second greatest commandment ever given, is to “love your neighbor as yourself”.  (Mathew 22, verse 39)   And our neighbors are sinners, just like each and every one of us is a sinner.   And on top of that, in  Luke 10, verses 29 thru 36,  when He told the parable of the good Samaritan, He taught that ALL people should be our neighbors.

Actually, let me clarify something.  The specific point that Jesus made with this parable, is that when we do good to someone, like the good Samaritan did to the man who had been beaten and robbed, we then prove ourselves to BE a neighbor.  In other words, a neighbor, is a person who DOES the good works that need to be done.

Now, Jesus did NOT tell us, that we should love our neighbor, IF they are without sin.  Because no one is without sin!  “If we say we have no sin, we deceive ourselves, and the truth is not in us.”   1 John 1, verse 8.

As a Christian, and as a sinner, each one of us has the obligation to God, to love other sinners.  That’s as plain as it can be said, and that’s exactly what the bible says.

That’s an interesting statement;  “While we were yet sinners”.   Are we no longer sinners, after we receive forgiveness in Christ?  Are we now “better” than other people, because we’ve been forgiven of our past sins?   Well, we’re certainly in a better condition than we were in, but we’re no better than anyone else.

But you see, that’s exactly what people want to accuse Christians of.  They want to accuse Christians, of “thinking” that they’re better than other people.  And I’m sure that there have been some Christians who have fallen into that trap.  And I’m sure that satan wants you to fall into that trap.  The trap of arrogance, and the trap of looking upon someone else as “less valuable”, or possibly, looking at someone, as if they had NO value at all.

Maybe someone is living a lifestyle that we know is sinful, and we look down on them because it.  But that’s exactly what the bible is referring to when it says;  “While we were yet sinners, Christ died for us.”  We were ALL living a lifestyle that’s sinful!  That’s the whole point of Christ.  He came so that we could all be forgiven, of our PAST lifestyle!

“And such were some of you..”  Such what were some of you?   Verses 9 & 10,  tells us what some of them were;  “Fornicators, idolaters, adulterers, effeminate, abusers of self with men, thieves, covetous, drunkards, revilers, and extortioners.”

What do we think of people who are involved in those kind of things?  Do we look down on them, because they’re so sinful?  Dow e think that we’re better than they are?  Do we hate them?  If we do, then we need to be repenting, of all of that.  “Let him who thinks he stands, take heed, lest he fall.”  (1 Corinthians 10, verse 12)

If we think that we’re better than people who are involved in sinful lifestyles, and if we look down on them, and if we hate them, then we HAVE fallen, and we better take heed, so that we don’t stay in that condition.   And we better humble ourselves, and get back up and repent, and ask God for forgiveness, and ask that our hearts be softened.

Are Christians supposed to hate sin?  Of course they are.  We are to pattern ourselves after God.   Proverbs 6:16 thru 19  says;  “There are six things that the Lord hates.  Yea, seven are an abomination to Him.”  God hates sin, and so must the Christian.  And we need to be very honest with ourselves;  It can be difficult to say the least, to hate sinful actions, and sinful lifestyles, but still remain compassionate, and loving towards those who are involved in sins.

Hopefully, when we became a Christian, we turned away from the sinful things that were in our lives.  And hopefully, we do our very best every day, to keep those things in the past.   Romans 6, verse 2,  asks us this question;  “How can we who have died to sin, live any longer therein?”

We’ve got our work cut out for us.  Hate the sin, but love the sinner.  It may not be practiced near as often as it should be, but if we’re going to call ourselves Christians, then we, of all people, need to learn to practice it.