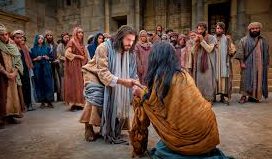 I’d like to read to you a short bible story about Jesus, and the scribes and the Pharisees, and an adulterous woman.  The reading is from  John chapter 8, verses 2 thru 11.  Follow along in your own bible if you’d like.

I wonder what Jesus was teaching that morning?  Do you think He was teaching about love, or maybe forgiveness, or repentance, or humility.  Or maybe He taught that “whoever wishes to be great among you, shall be your servant”.  (Mathew 20:26)   Or maybe He might have been teaching the people how “All have sinned, and fall short of the glory of God”?   (Romans 3:23)

Whatever Jesus was teaching, here’s what happened next, beginning in  verse 3;  “And the scribes and the Pharisees brought a woman caught in adultery, and having set her in the midst, they said to Him;  Teacher, this woman has been caught in adultery, in the very act!  Now in the law, Moses commanded us to stone such a woman.  What do you say?

Can you picture it?  Here’s Jesus sitting down, and all the people who have come to Him, they’re probably sitting there all around Him, and they’re listening to His words, and here come the scribes and the Pharisees, and they march right in, and get right in the middle of everything, and they set the woman right “in the midst”, as the scripture says.

You’ve seen people like that.  No manners, no thought for anyone else that was there, they just march right in and get right in the middle of things, because they had an agenda.  But the people had gathered to hear Jesus.  They knew there was something special about Jesus.  In the previous chapter,  chapter 7,  and in  verses 40 & 41,  the people were saying;  “This certainly is the prophet.  Others were saying;  This is the Messiah!”  And in  verse 46,  some officers from the temple said;  “Never did a man speak the way this man speaks.”  People sensed that it was important to hear what Jesus had to say.

Do you remember the story about when Jesus was traveling, and He stopped at the home of Mary and Martha?  Mary and Martha were the sisters of Lazarus, the one who Jesus raised from the dead.  Let me read that little story to you;  it’s just a few verses.  It’s in  Luke 10:38 thru 42;  Here’s what it says;

“Now as they were traveling along, He entered a certain village, and a certain woman named Martha welcomed Him into her home.  And she had a sister named Mary, who moreover, was listening to the Lord’s word, seated at His feet.  (that’s just what they were doing in the temple courtyard that one morning)  But Martha was distracted with much service, (she was no doubt trying to provide something for Jesus to eat and drink) and she came up to Him and said;  Lord, do you not care that my sister has left me to do all the serving alone?  Then tell her to help me.  But the Lord answered and said to her;  Martha, Martha, you are so anxious, and troubled, about many things.  However one thing is necessary, and only one thing.  For Mary has chosen the good portion, which shall not be taken away from her.”

Now let’s go back to  John chapter 8.  The scribes and Pharisees bring a woman to Jesus, who had been caught in adultery, and they said to Jesus;  “Now in the law, Moses commanded us to stone such a woman.  What do you say?”  The scribes and the Pharisees had an agenda, and here’s what their agenda was;   Verse 6  says;  “And they were saying this, testing Him, in order that they might have grounds for accusing Him..”

Their whole purpose was to try to find fault, and guilt in Jesus.  We don’t know for certain, what they thought the could accomplish here, but it’s been inferred, that if Jesus had said not to stone the woman, then they could accuse Him of going against the law of Moses.  And if He agreed to stone the woman to death, then they could accuse Him of going against Roman law, which said that the Roman government was the only one who could put someone to death.  So they thought they had Jesus in a trap, with no way out.

I don’t know what the scribes and Pharisees weren’t guilty of!  Do you think that sometimes we’re guilty of doing things for things for “the outward appearance”, and we neglect what’s inside?  Man doesn’t always see things like God does.   We’re told in  1 Samuel 16, verse 7;  “..For God sees not as man sees;  For man looks at the outward appearance, but the Lord looks at the heart.”

The scribes and Pharisees didn’t care one bit about the woman that they brought before Jesus.  They certainly didn’t care about her heart.  But you might say, Well, that woman’s heart was definitely in the wrong place, who cares if she gets punished!   Jesus cared, didn’t He?  Jesus not only cared about her heart, but He cared about her soul!  And it’s a good thing that He cared about your heart, and about your soul, and my soul.  Because if He didn’t care, we’d all be lost!  If we hadn’t been given the chance to repent, where would we be now?

The scribes and the Pharisees were asking Jesus to make a judgment, and the scripture says;  “And they were saying this, testing Him, in order that they might have grounds for accusing Him.  But Jesus stopped down, and with His finger, wrote on the ground.”  That seems like a strange thing to do.  Jesus had obviously gotten up when the scribes and Pharisees came in with the woman, and they put this question to Him, but then He stoops down and writes on the ground.  What did Jesus write on the ground?

The bible doesn’t tell us what Jesus wrote.  But I know one word that Jesus might have wrote, that would fit this story perfectly.  It’s a word that Jesus used several times in addressing those Jewish religious leaders.  And the word is “Hypocrites”.   “Scribes and Pharisees, hypocrites!”  So, maybe that’s what Jesus wrote in the ground that day.  I’m not saying it was, but it could have been!  It certainly would have fit.

Verse 7  says;  “But when they persisted in asking Him, He straightened up, and said to them;  He who is without sin among you, let him, cast the first stone at her.”   And it says in  verse 8;  “And again He stooped back down. and wrote on the ground.”

Now what did Jesus write on the ground?  Since we’re not told, I suppose it really doesn’t matter.  But it was the words that Jesus spoke, that mattered!  “He who is without sin, let him cast the first stone.”  Verse 9  says;  “And having heard, and by their conscience being convicted, they began to go away, one by one, having begun with the elder ones, until the last, and He was left alone;  Jesus, and the woman, in the midst.”

Remember how Jesus had been teaching a crowd of people who had followed Him into the temple courtyard, and how the scribes and Pharisees had brought the woman into their midst.  Well, even though the scribes and Pharisees had left, I’m sure the crowd was still there, and had witnessed everything.  And now it was Jesus and the woman in the midst, with the crowd all around.  And you just know, that everyone was waiting to hear what Jesus would say next.  I know I would have been.

It says in  verses 10 & 11;  “And having stood up, and seeing no one but the woman (in other words, all the scribes and Pharisees were gone now) He said to the woman;  Woman, where are they who accuse you?  No one has condemned you.  And she said;  No one Lord.  And Jesus said;  Neither do I condemn you.  Go, and from now on, sin no more.”

Why didn’t Jesus condemn the woman?  He knew she was guilty.  He knew she had sinned.  But instead of simply condemning her, He gave her the opportunity to repent.  Jesus said, in  John 3:17;  “For God did not send the Son into the world, to condemn the world, but that the world should be saved through Him.”  What a lesson for the woman, and for everyone in the crowd that had come to hear Jesus teach!

Thank God, for His mercy and His patience, and His forgiveness.  Jesus said;  “Go, and from now on, sin no more.”  Isn’t that exactly what He tells us to do?  Go and sin no more?

The Spirit of Jesus Christ, tells us in  Romans 6, verse 6;  “Knowing this, that our old self was crucified with Him, that our body of sin might be done away with, that we should no longer be slaves to sin.”  And He says in  verses 11 & 12;  “Even so, consider yourselves to be dead to sin, but alive to God in Christ Jesus.  Therefore, do not let sin reign in your mortal body, that you should obey it’s lust.”  In other words, “Go and sin no more!”

When Jesus first started His three, or three and a half years of teaching, do you know what the very first thing was that He taught?  The book of Mark tells us the very first thing that Jesus preached;  Mark 1:14 & 15  says;  “..Jesus came into Galilee, preaching the gospel of God, and saying;  The time is fulfilled, and the kingdom of God is at hand;  Repent and believe in the gospel.”

Do you know what it means to repent?  It means, that you consider your sins, and that you feel sorry for the fact that you’ve sinned, and that you make the decision to NOT sin anymore.  “Go and sin no more!”

In closing, I’d like to read a few verses from the book of Luke.   Luke 4, verses 14 thru 21;  “And Jesus returned to Galilee, in the power of the Holy Spirit, and news about Him spread through all the surrounding district.  And He began teaching.. (there He goes teaching again.  And again, hearing Jesus is the only thing that matters)  “..He began teaching in their synagogues, and was praised by all.  And he came to Nazareth, where He had been brought up, and as was His custom, He entered the synagogue on the Sabbath, and stood up to read.”

“And the book of the prophet Isaiah was handed to Him.  And he opened the book, and found the place where it was written;  The Spirit of the Lord is upon Me, (And the eyes of everyone in the synagogue were upon Him also) ..because He has anointed Me to preach the gospel to the poor.  He has sent Me to proclaim release to the captives, (that means release from sin) and recovery of sight to the blind, (Jesus is the “light” of the world, to allow us to see)  and to send forth the broken down, (those broken down in sin) with forgiveness, and to proclaim the year of the Lord’s favor.”  (of His acceptance, and His offer of salvation)

Now picture Jesus standing right here today;  “And He closed the book, and gave it back to the attendant, and sat down.  And the eyes of all in the synagogue were fixed upon Him.  And he began to say to them;  Today, this scripture has been fulfilled in your ears!”

And it’s been fulfilled in your ears as well.  Go, and sin no more.  Behold, now is the acceptable time;  Behold now is the day of salvation.  If you’ve not been saved yet, now is the time, and today is the day.  Hear His word, and believe His word.  Take this opportunity, to repent of your sins, and to confess His name, and to be buried in baptism for the forgiveness of your sins.

Today is the day, and now is the time, to be forgiven, and to sin no more!